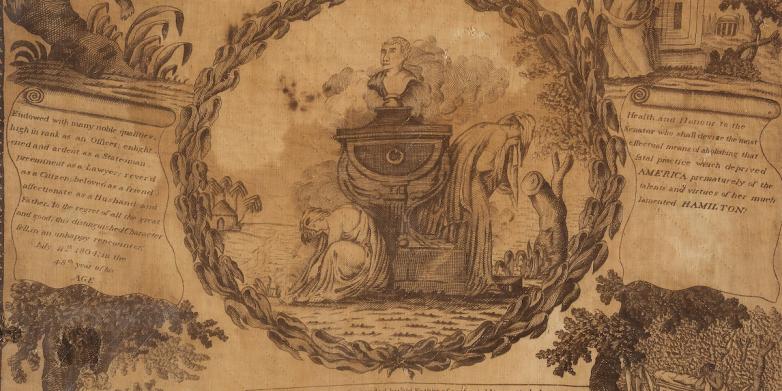 Dallas, TX – One of the most important historical textiles commemorating the death of the co-author of the Federalist Papers is among the fascinating lots in an exceptional single-seller event coming May 15 to Heritage Auctions.

The Alexander Hamilton: A Marvelous Large Scarf Mourning His Death at the Hand of Aaron Burr in 1804 (estimate: $20,000+), one of just two known to remain in existence, tops a trove of 438 lots in the Tom Huston Americana & Political Auction. 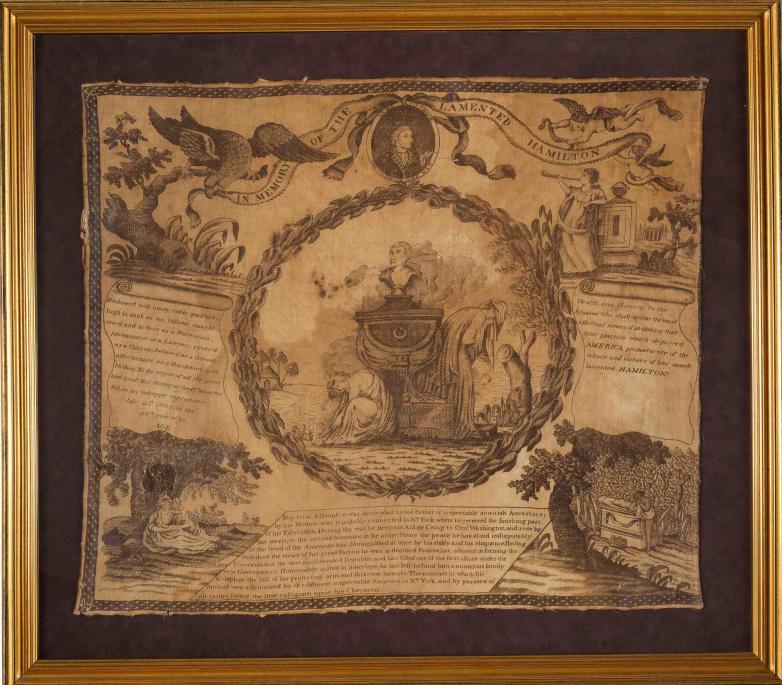 “What makes this collection so impressive is its sophistication,” Heritage Auctions Americana Director Curtis Lindner said. “Huston’s items reflect a deep knowledge of these items’ historical context as well as rarity from the collector’s standpoint. He has been collecting for more than 60 years, and he is still collecting. He started as a young man, and he clearly loves what he is doing – that is evident in the selections we have in this auction.”

The first Secretary of the Treasury and architect of the American financial system, Alexander Hamilton was, by any measure, one of the most significant American statesmen never to serve as president. As is the case with most of the Founding Fathers, very few enduring display items honoring him seem to have been produced. This rarity is stunning; the other known example is significantly faded. Interestingly the text includes a call for the banning of dueling, as Hamilton died at the hand of Vice President Aaron Burr in one of history’s most infamous such encounters.

An Andrew Jackson: The Iconic Anti-Jackson "King Andrew" Broadside (estimate: $15,000+) is one of the rarest of  political broadsides, one of perhaps a half a dozen known to exist, and they rarely come to market. This is the U.I. “Chick” Harris example, purchased by Huston when that legendary collection went to auction some 20 years ago. One of the earliest American political cartoon broadsides, it was published circa 1832. Jackson is shown in royal attire, a scepter in one hand, and a veto slip in the other. He stands atop tattered pieces of the U.S. Constitution and the legend “Internal Improvements of the U.S. Bank.” Jackson's celebrated stance against the Bank of the United States was one of the great political confrontations in American history.

Abraham Lincoln is among the most popular American political figures for collectors, and the collection has plenty to offer to collectors at all levels, with 37 Lincoln lots in the auction. Among the top lots from the 16th president are:
•    A Very Rare Oval White House Platter (estimate: $15,000+) – official White House china is among the most sought-after categories of presidential artifacts and Lincoln examples are particularly esteemed. Most pieces typically are the round dessert or dinner plates; this is believed to be the first oval Lincoln platter Heritage Auctions has offered.
•    A Baseball Theme Currier & Ives Cartoon (estimate: $8,000+) is rightly considered the best political cartoon of the 1860 election by virtue of its connection to the formative years of baseball. The four presidential candidates are portrayed, each wearing a belt with the name of his respective team [political party] and each carrying a bat indicating their political program or platform. Lincoln seems to be on the verge of winning the contest as he stands on “Home Base” and dispenses advice to his losing opponents on how to succeed in this game.
•    A gorgeous Lincoln and Hamlin 1860 Campaign Ribbon (estimate: $4,000+) features an unusual woodcut image of Lincoln along with the candidates’ names and facsimile Lincoln signature. It is one of the best single portrait Lincoln ribbons Heritage ever has offered.

Collectors of jugate campaign items, picturing both presidential and vice presidential candidates, will have a chance at 98 jugate lots in the sale. The top offerings include but are not limited to:
•    A Bryan & Stevenson: Awesome Large Multi-Color Jugate Poster from the 1900 campaign (estimate: $15,000+). Although several colorful jugate posters featuring William Jennings Bryan and Adlai Stevenson were produced, this is the largest, the most beautiful and most likely, the only known example. It was near the top of the "Want List" of noted Bryan-Stevenson specialist Gary Cohen, who tried unsuccessfully for years to entice Huston into parting with it. Illinois governor Adlai Stevenson, Bryan’s running mate, was the grandfather of the candidate of the same name who twice ran unsuccessfully against Dwight Eisenhower in the 1950s.
•    A Harrison & Morton: A Spectacular Large Jugate Campaign Banner (estimate: $10,000+), which remains free of the heavy deterioration almost always seen in 19th century silk banners. The banner resembles a similar campaign ribbon, doubtless from the same manufacturer. But, while the ribbon comes up for sale on occasion, this is the only example of the banner of which we are aware, making it arguably the premier manufactured 19th-century political banner (other striking banners exist, they almost always were hand-painted).
•    A Taft & Sherman: A Spectacular & Unique 1 3/4" Jugate (estimate: $7,000+), with portraits of both running mates on the side of the Republican elephant. Sometime in the late 1950s, Huston's father stopped at a shop where a small group of old political pins was for sale. Knowing how much his son loved American political history, he bought the group as a gift, launching Tom Huston on a collecting journey of more than 60 years. The offered Taft button, part of that seminal group of purchases,  remains the only known example.

For images and information on all lots in the auction, visit HA.com/6239. More items from the Tom C. Huston Collection will be available a week later in the May 22 Tom Huston Americana & Political Special Online Auction.