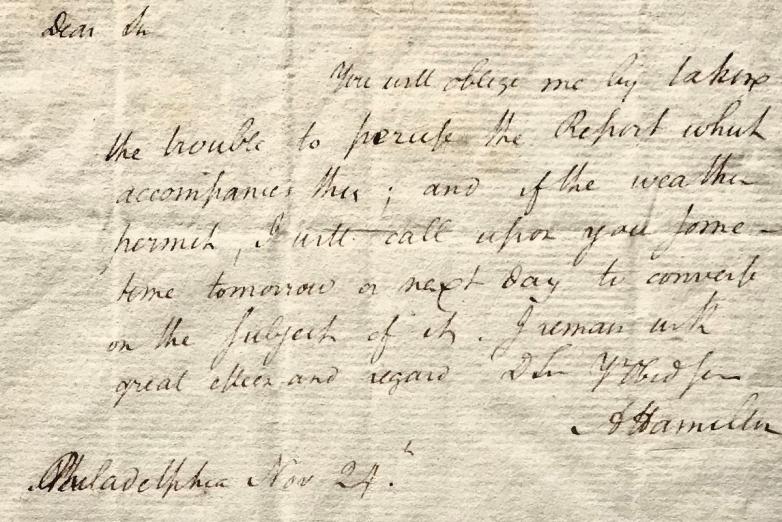 New York – Lion Heart Autographs, Inc., for more than forty years, one of the world’s premier dealers in rare autographs and manuscripts announced that a rare letter from Alexander Hamilton to James Madison (1790) sold for well over the original estimate at $113,850.  The original estimate at auction was $8,000-$10,000. The Lion Heart Auction No. 13 took place on Wednesday, April 28, 2021 in New York.

The unique 1790 Alexander Hamilton handwritten letter to James Madison mentioning Thomas Jefferson: the only letter between the two ever to appear at auction and likely the last one still in private hands chronicled the events which inspired “The Room Where It Happens,” from the musical “Hamilton.”

The letter connecting three founding fathers was written when Hamilton, the nation’s first Secretary of Treasury, and Secretary of State Jefferson were at odds, until, with Madison’s assistance, they resolved their differences and agreed to the Compromise of 1790, which provided for the nation’s capitol to be moved to a location on the Potomac River and the passage of Hamilton’s resolution that the federal government assume the debts incurred by the states that had fought in the Revolutionary War.

Lion Heart Autographs Auction No. 13 featured over 170 lots of rare and historical documents, manuscripts and ephemera from two private collections that were hidden away for decades. The auction exceeded several original estimates and saw bidders from around the globe bidding fast and furious throughout the auction event.