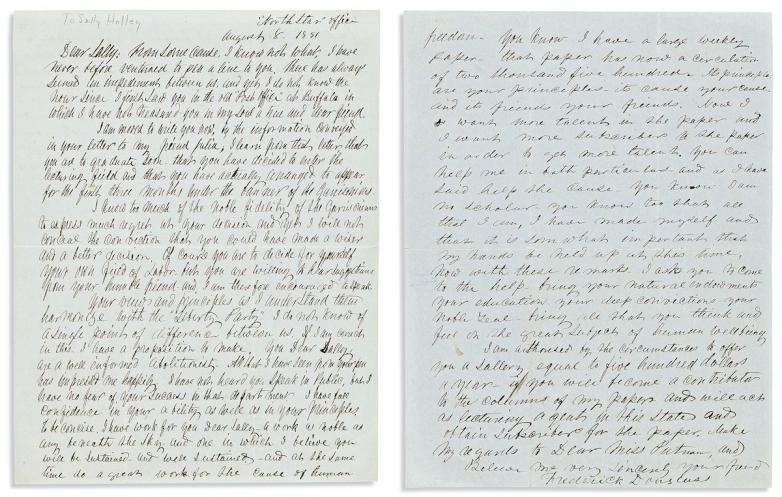 New York — Fine Books & Autographs are on the block at Swann Galleries on Thursday, February 25. The sale will offer a premier selection of manuscripts, documents, correspondence and more by significant figures throughout history and pop culture, as well as rare first editions and art books from the nineteenth and twentieth centuries.

Leading the sale is an 1851 autograph letter signed by abolitionist Frederick Douglass. The letter, addressed to Sallie Holley—recruiting her help for the Frederick Douglass Paper after his schism with Garrisonian abolitionism, and the merging of his North Star paper and the Liberty Party Paper—is expected to bring $20,000 to $30,000. Additional pioneers and trailblazers feature Albert Einstein with an autograph manuscript in German, with 11 lines of equations and three lines of text relating to a static field represented by “Killing Vectors” ($10,000-20,000); and Florence Nightingale is on offer with an ALS from 1861 to a Mrs. Fowler attesting to the selfless and devoted character of Miss Jones—superintendent of nurses at St. John’s House ($3,000-4,000).

Americana features a 1780 doctor’s note for a revolutionary soldier declaring them unfit for military duty signed by Benjamin Rush ($2,500-3,500); a partly-printed document signed by Samuel Adams as Governor ordering the Treasurer Thomas Davis to pay funds for prosecuting individuals for counterfeit money ($1,500-2,500); and an 1843 affidavit signed by Joseph Smith for an Isaac P. Chase to appear in court or pay a fine, in relation to the trial of Oliver H. Olney, who had been excommunicated by the Mormon church in 1842, and published The Absurdities of Mormonism Portrayed in 1843 ($8,000-12,000).

Limited previewing (by appointment only) will be available through February 24, to be scheduled directly with a specialist in advance and conforming to strict safety guidelines. Swann Galleries staff will prepare condition reports and provide additional photographs of material on request. Advance order bids can be placed with the specialist for the sale or on Swann’s website, and phone bidding will be available. Live online bidding platforms will be the Swann Galleries App, Invaluable, and Live Auctioneers. The complete catalogue and bidding information is available at www.swanngalleries.com and on the Swann Galleries App.