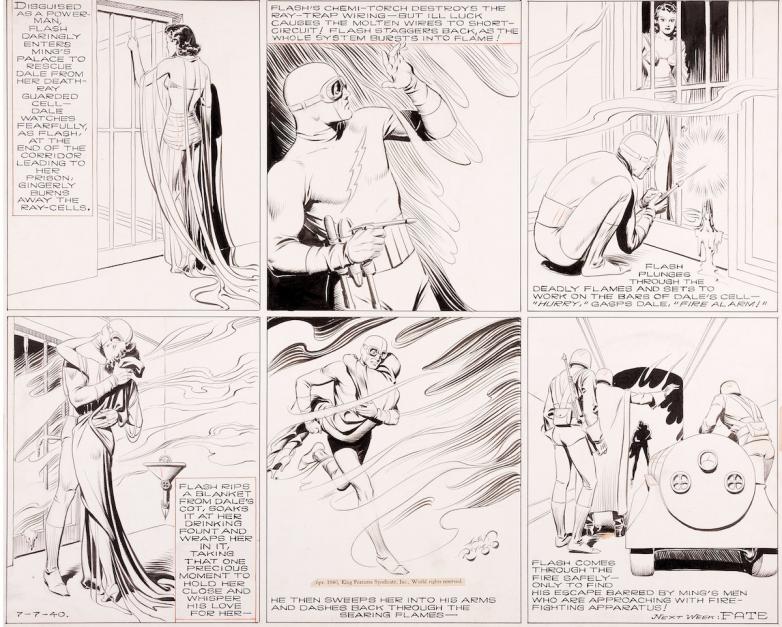 Dallas, TX – Any Alex Raymond primer should begin with this excerpt from A History of the Comic Strip, written in 1968 to coincide with an exhibition in the hallowed halls of the Musée des Arts Décoratifs at the Palais du Louvre.

“Of all the great comic-strip creators, Alex Raymond unquestionably possessed the most versatile talent,” it begins. “Other artists surpassed him in the creative power of boldness of style, others in the development of the plot or in accuracy of dialogue. But none possessed as varied an array of talents – talents that enabled him to master all the various types of strips at which he tried his hand.”

In 1934, while only his mid-20s, the New Rochelle, N.Y., native created three strips for his employer King Features Syndicate. One was Secret Agent X-9, a collaboration with The Maltese Falcon’s author Dashiell Hammett; another was Jungle Jim, which chronicled the exploits of a wild-animal hunter and explorer. And the other was Flash Gordon, initially created to rival the popular Buck Rogers and, in the end, the ultimate victor in whatever competition existed between the two far-flung earthmen thrust toward the edges of time and space.

Two early Flash Gordon strips will appear in Heritage Auctions’ Oct. 3-4 European Comic Art event, which previews at Galerie 9e Art in Paris from Sept. 30-Oct. 3 and will be held online and at Heritage’s world headquarters in Dallas. The sale is heavy with highlights from some of Europe’s best and best-known talents, among them Milo Manara, Enki Bilal, Jean Giraud and Moebius, interspersed with never-before-available chefs-d'oeuvre from some of the most influential American illustrators and animators.

Both original Flash Gordon strips come from the family of Alex Raymond, which only recently decided to part with some of the most significant strips drawn by one of the medium’s most important creators.

The family is also making available for the first time six original Rip Kirby strips from 1946 until 1956, the year Raymond was killed in a car crash. Forgoing a return to the strips that made him famous, Raymond began work on the Kirby strips upon his return from World War II, and made his private detective a former Marine – just as Raymond had been.

“No matter how young the collector or how ‘modern’ their collection, they will always wind up wanting to own an Alex Raymond,” says Joe Mannarino, who, with his wife Nadia, co-heads Heritage Auctions’ East Coast Comic Books and Original Comic Art category.

“The pillars upon which everything was built are Little Nemo creator Winsor McCay, Prince Valiant’s Hal Foster, Krazy Kat’s George Herriman, Terry and the Pirates creator Milton Caniff and Alex Raymond,” Mannarino says “There will always be somebody who wants an example of that.”

For proof look no further than Heritage’s Sept. 10-13 Comics & Comic Art event, where a Raymond Flash Gordon-Jungle Jim original from 1939 sold for nearly $100,000, making it one of the top 10-performing pieces in a 1,074-lot sale that completely sold out (and the fifth-highest price ever paid for a Raymond original through Heritage Auctions). And earlier this year, the first-ever Flash Gordon strip sold at auction for close to $500,000.

The two strips in the European Comic Art event date from 1940, and were each part of the long-running “The Power Men of Mongo" storyline. As our online catalog notes, this was “the first great story arc in the strip's celebrated run.”

One Flash Gordon original strip dates from July 7, 1940, and features Gordon in a red suit emblazoned with a yellow lightning bolt – an homage, perhaps, to writer Gardner Fox and artist Harry Lampert’s Golden Age Flash Jay Garrick, who debuted only seven months earlier, and writer Robert Webb and artist Lou Fine’s Dynamo, who also made his bow in early 1940.

The similarities to both are uncanny.

“We always talk about Raymond being such an influencer, but he was also being influenced,” Mannarino says. “It’s such a unique piece because it bridges comic-strip art and comic-book art.”

The other, topped with a Jungle Jim strip, comes from August 12, 1940, and features Flash attempting to rescue political prisoners, including Dr. Hans Zarkov, from one of Ming the Merciless’ concentration camps. The prophetic strip appeared long before most Americans discovered what was happening across Europe.

Flash Gordon long outlived his creator, who died in 1959. The strip ran in newspapers from 1934 until 2003, penned by a variety of writers and artists. He spawned decades’ worth of movie serials, cartoons, comics and big-screen features. And as George Lucas wrote in his introduction to the 2007 book Alex Raymond – His Life and Art, had it not been for Raymond and Flash, there may never have been a Star Wars.

“Alex Raymond’s boundless imagination has inspired me and countless others to pursue their own fantasies,” Lucas wrote. “His presence is still felt and remembered so many years after his death, and he has directly or indirectly touched us all. I, for one, am very thankful for his inspiration.”