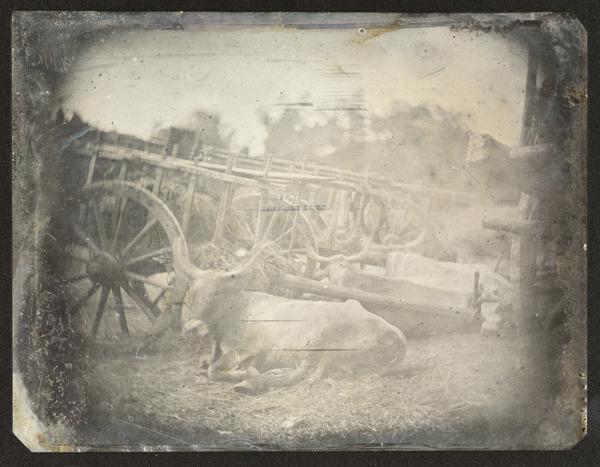 New York — In conjunction with a new exhibition that highlights animals in photography, the search is on for the earliest photograph ever made of an animal. By Hoof, Paw, Wing or Fin: Creatures in Photographs, on view through November 15, 2019 at Hans P. Kraus Jr. Fine Photographs, explores some of the ways in which photographers have represented animals over the course of the medium’s history.

A few days before the show opened in September, a contender for the first photograph of an animal arrived quite unexpectedly at the gallery. The daguerreotype, by Joseph-Philibert Girault de Prangey, depicts cattle reclining by their carts in the Roman Forum or at a cattle market in Rome.

According to the chronology established by Stephen Pinson in Monumental Journey, the Daguerreotypes of Girault de Prangey (New York: The Metropolitan Museum of Art, 2019), one of de Prangey’s first stops on his Mediterranean journey was Rome from April to July 1842. Since it appears that this was the only time he worked in Rome, this daguerreotype of cattle can be precisely dated April to July 1842, and is possibly the earliest firmly dated photograph of any animal.

Rome, Forum, Boeufs was not included in the remarkable Girault de Prangey exhibition at the Metropolitan Museum (30 January - 12 May 2019). The exhibition By Hoof, Paw, Wing or Fin at Hans P. Kraus Fine Photographs marks the first time this daguerreotype has been on public view.