Einstein, Fermi, Darwin Among Fine Autographs and Artifacts up for Auction 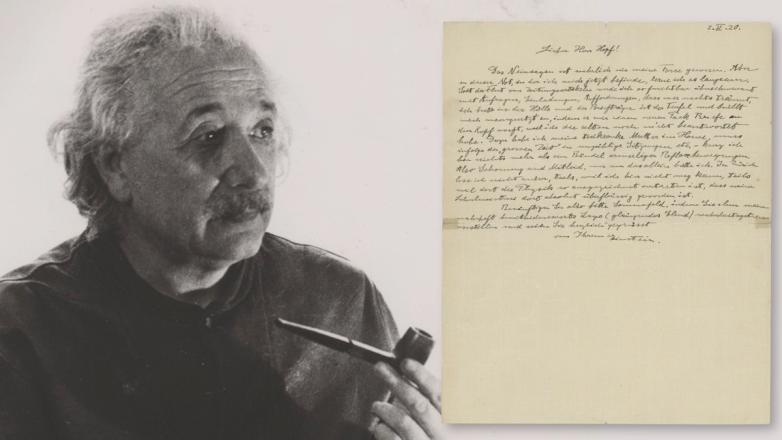 Left: Jacobi portrait of Einstein from 1942; Right: Einstein letter commenting on his instant fame in 1920.

Highlights include an Albert Einstein signed letter where Einstein commented on his instant fame in 1920. The important one-page letter in German, is dated 11, February 2, 1920. Handwritten letter to fellow physicist Ludwig Hopf, commenting on his newfound fame brought about by the experimental confirmation of gravitational light deflection. In part (translated) At night I dream I am burning in hell and the postman is the devil and is continually screaming at me, hurling a fresh bundle of letters at my head because I still haven't answered the old ones."

Sir Arthur Eddington performed the first tests of Einstein's General Theory of Relativity during the total solar eclipse of May 29, 1919. His observations of the gravitational deflection of light offered the first experimental proof of Einstein's groundbreaking theory. Widespread newspaper coverage of these results—commented on in the present letter—led to worldwide fame for Einstein and his theories, and he received the Nobel Prize in 1921. "It's a remarkable and insightful letter by Einstein on his overnight celebrity and its effects on his life and work," said Bobby Livingston, Executive VP at RR Auction. (Estimate: $20,000+)

Also included in the sale is an Enrico Fermi signed galley proof. Fermi signs a two-page corrected galley proof of his analysis of Einstein's Theory of Relativity, which refers to the famous mass-energy equivalence equation E = mc2 and anticipates the atomic bomb. A museum-quality piece signed by Fermi at the outset of his celebrated career in physics. (Estimate: $30,000+)

Among other featured lots is Charles Darwin signed letter. The two pages on two adjoining sheets, January 29, 1860. Handwritten letter to his former teacher, John Stevens Henslow, discussing the Origin of Species, in part: "My Book has been far more successful as yet, than I dreamed of." A remarkable autograph letter by Darwin alluding to the great success of his most important work. (Estimate: $10000+)
In addition to a Nikola Tesla signed letter from 1896, just five days before illuminating the city of Buffalo. It seems likely that Tesla wrote this letter to Edward Dean Adams, the president of Niagara Falls Hydraulic Power and Manufacturing Company, which built the first hydroelectric power plants—designed by Tesla—in Niagara Falls, New York. Just five days after this date, at midnight on November 16, 1896, the power plant underwent its first test transfer of electrical power. By the flip of a switch, the Adams Power Plant Transformer House went online, and power began to flow into homes nearby in Buffalo. It marked a signal moment in Tesla's quest to illuminate the world. (Estimate: $5000+)

The Fine Autographs and Artifacts featuring Science and Technology from RR Auction will conclude on December 8. For more information, go to www.rrauction.com.