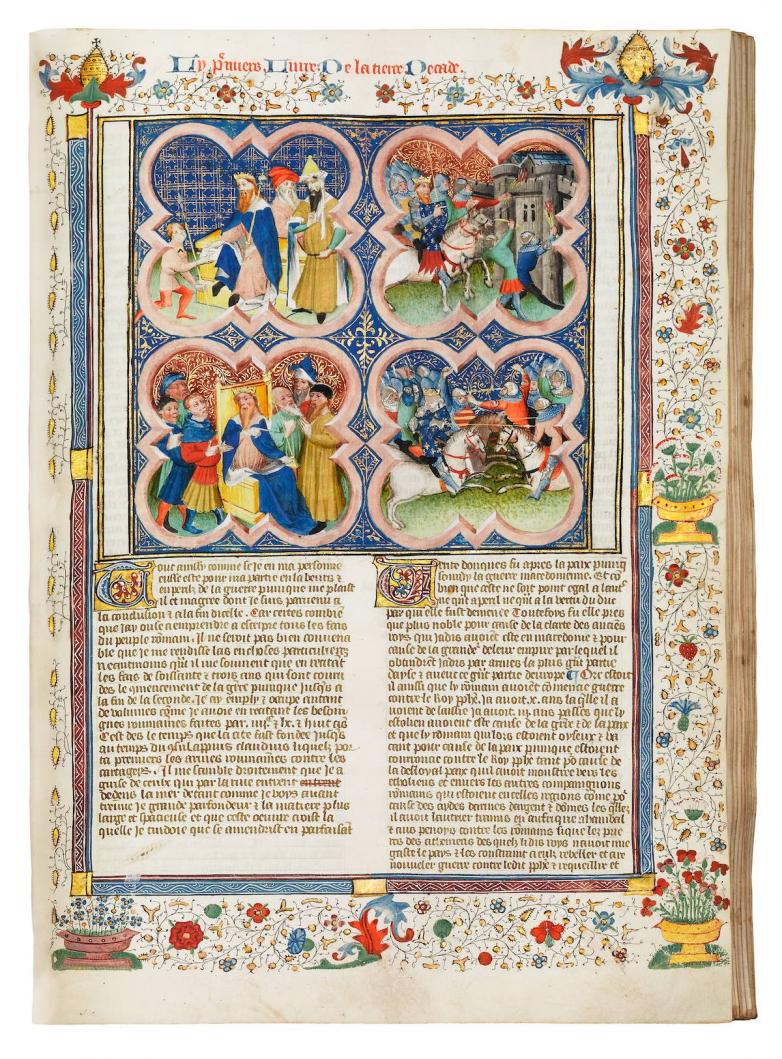 The earliest manuscripts on display are from the 13th century and have mostly theological, but also jurisdictional content.

A particularly interesting example is a Psalter commentary that was written and illuminated with hundreds of ornamental and nine historiated initials in Paris around 1230-50. It was enhanced with burnished gold border decoration in Spain two centuries later. This demonstrates, how books were used, annotated, re-decorated and cherished throughout the centuries.

Books were great treasures in the Middle Ages and the Renaissance and often enough their prices equalled the costs of a great deluxe mansion.

The so-called Decretales, composed by Pope Gregory IX, and other legal texts are represented in an imposing folio volume (440 x 270 mm) with countless annotations by the first owner and illuminated (5 miniatures) by one of Paris’ most prestigious artists: The Maître Honoré around 1281.

Books of Hours are prayer books for private use – often in small format – that were not only used for personal contemplation and devotion but also as bearer of great artworks and an aesthetic attraction of prestigious libraries.

Many renowned bibliophiles and collectors have employed the greatest artists of their times to decorate and illustrate their personal Books of Hours. Important panel painters like Jan van Eyck, Rogier van der Weyden, Jean Fouquet, Michelino da Besozzo, Andrea Mantegna and many more, have participated in manufacturing beautiful books for their patrons. In our stock you will find around forty Books of Hours from the 14th to the 16th century and from different regions.

Another focus of our gallery are literary manuscripts, which are not easy to come by in complete and mint copies, because they have been read over and over again throughout the centuries and many of them have been destroyed and lost for ever. Thus, we are very proud to present an impressive number of literary and historical works, not only in excellent condition, but also illuminated by great artists for equally great collectors.

We will also present a group of works that show the material culture related to the movement of people around the world. The most extraordinary example is the San Salvador Huejotzingo Pleitos, made in Huejotzingo, Mexico in 1571. This manuscript in Spanish and Huejotzinca pictographs is written on paper by at least two hands. It is dated in 1571 and records a lawsuit of the village’s native inhabitants against a dishonest and exploitive Spanish canon. 6 fabulous drawings illustrate the details of the villagers’ dept claims. A thrilling discovery of a completely unknown, illustrated Mesoamerican codex and one of only six known extant manuscripts from this region, furthermore the only one in private hands.

Collections of single leaves and cuttings were foremostly established in the 19th century, when it was very much en vouge to use richly ornamented leaves as framed pictures on the walls. Dr. Jörn Günther Rarebooks has a considerable choice of these decorative items.

Printed books from the 15th and 16th centuries

The earliest printed books with movable types are also called incunables from the Latin word incunabula = cradle. It is still not quite clear, where this expression comes from, but the most plausible explanation is that the art of book printing was still in its nappies when these books were made.

Nevertheless, these first testimonies of a cultural shift were skilfully made and of an impressive quality.

Very soon after the invention of printing by Johannes Gutenberg around 1455, printers in Europe started to experiment with illustrated editions like the one shown here.

Albrecht Dürer was one of the most celebrated German artists of his time. His godfather, Anton Koberger, was an internationally successful printer and publisher in Nuremberg. It was in Koberger’s workshop that Dürer got in touch with the so-called “black art”. One of Dürer’s impressive projects were his “Three Large Books”: The Apocalypse (photo), the Life of the Virgin and the Passion of Christ. All executed in large woodcuts and later completed with text on the back of the leaves.

The history of the artistic book would not be complete without the ambitious projects of Emperor Maximilian I of Habsburg. He strived for immortality by setting up several large-scaled and richly illustrated editions, accomplished by the best artists of his realm. The Theuerdank, presented here in a breathtaking copy on vellum with a wonderful lavish colouring, accounts the fictive journey of the young Maximilian to his spouse to be, Mary of Burgundy.