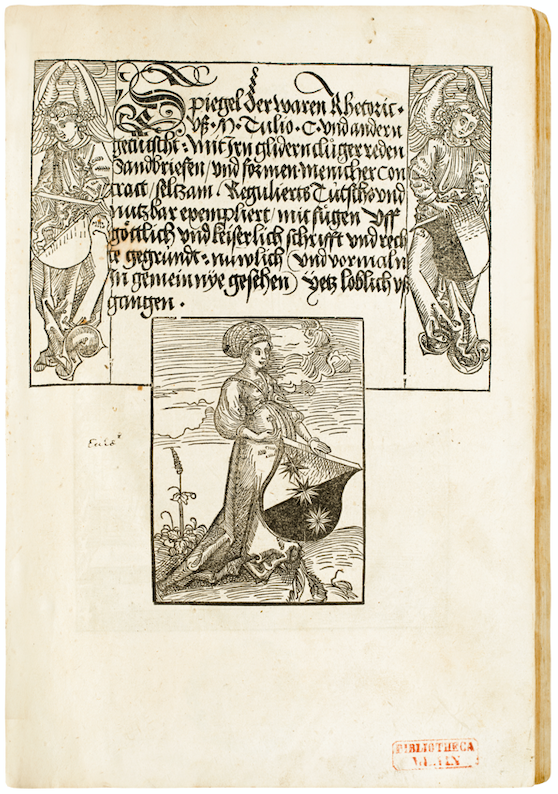 Basel, Switzerland — Dr. Jörn Günther Rare Books will return to TEFAF Maastricht in 2020 with an outstanding selection of manuscripts, miniatures, and early printed books. This year’s exhibition has a special focus on Albrecht Dürer, the Renaissance artist par excellence. Dürer was a pioneer and an innovator with considerable entrepreneurial spirit. His vast body of work includes paintings, drawings, engravings, and woodcut prints – which were also sold as books. In fact, his books generated a new source of income for him, allowing him to make more money with his books than with paintings.

Dr. Jörn Günther Rare Books’ exhibition in Maastricht will trace Dürer’s entire career – starting with an early woodcut that was likely made by the then 22-year old artist, then presenting his ‘three large books’, and finally the theoretical treatises on perspective and human proportion that he wrote toward the end of his life.

In the TEFAF Maastricht 2020 line-up, the earliest example of Dürer’s work is the xylographic title of Friedrich Riederer’s Spiegel der waren Rhetoric, a 1493 book that is considered a landmark in the domain of rhetoric. The title page is thought to have been designed by the young Albrecht Dürer, and probably created during his journey to Colmar. The heading’s calligraphic script is flanked by two angels holding coats of arms. Beneath is another fine woodcut with an elegant lady holding the armorial device of the author, Friedrich Riederer.

Dr. Jörn Günther Rare Books will also bring to Maastricht Dürer’s famous ‘three large books’, which are hardly ever seen together in commerce. Albrecht Dürer’s Apocalypse is considered to be the first book in history that was both created and published by an artist. The copy at hand is the first with the title woodcut depicting the apparition of the Virgin with Child to St. John. It includes the complete series of 16 monumental woodcuts. The publication of the Apocalypse was a revelation of Dürer’s artistic genius: never before had a single artist executed a project of such scope with total mastery over every aspect, utterly transforming the appearance of the illustrated printed book and of woodcut art. His large, complex images in realistic settings, full of life and movement, feature a descriptive power evident in the present series. Revolutionary for its time in both technique and breadth of concept, Dürer’s woodcut style graphically manifests the potency of St. John’s visions, capturing minute detail, rich texture, profound physical vigour, and his mastery of light and darkness.

Dürer’s Passio domini nostri Jesu, the Large Passion, is based on the text by Benedictus Chelidonius, a Benedictine monk from the monastery of St. Egidius/St. Giles in Nuremberg. The majestic cycle was created in two stages: seven undated woodcuts appeared in the years 1496-1499, approximately contemporaneous to the Apocalypse. Like those of the Apocalypse, they were also sold individually. Dürer completed this series by 1510 with four more scenes, eventually publishing them in book form in 1511, along with the title page and the Latin text by Chelidonius. The complete 1511 series printed in a single campaign is of great rarity. With this woodcut series, Dürer shaped the image of Christ’s Passion for centuries.

The Life of the Virgin is the most extensive woodcut sequence in Dürer’s trilogy, his ‘three large books’. The majority of the plates of the Life of the Virgin date from the years 1502-1505. However, it was not until 1510-11 that the final two plates and the title page were added. The copy at hand comprises a complete set of these early impressions, before the text was added, and are the rarest and most sought after. The later complete book was finally published in 1511, with a dedication to Caritas Pirckheimer, the learned abbess of the convent of St. Clara in Nuremberg and sister of Dürer’s great friend Willibald. The book was thus likely primarily intended for erudite women in the religious houses. With its slightly smaller format, graceful Renaissance architecture and vivid narrative, the Life of the Virgin is the most elegant of Dürer’s ‘three large books’.

Dr. Jörn Günther Rare Books will also present a collection of Albrecht Dürer’s cutting-edge artists’ manuals. This extraordinarily rare Sammelband (a collection of texts) consists of the three ground-breaking books Dürer wrote toward the end of his life. These include: his treatise introducing Northern Europe to the techniques of perspective and mathematical proportion in drawing, painting, architecture, and letter forms that Dürer learned in Italy; a treatise on fortification, with an additional, famous, large woodcut of a fortress under siege; and his masterpiece on the proportions of the human body. These three works are seen as the foundation of accepted aesthetic dogma until the 19th century – and highlight Dürer’s enormous influence on the artists of succeeding generations.