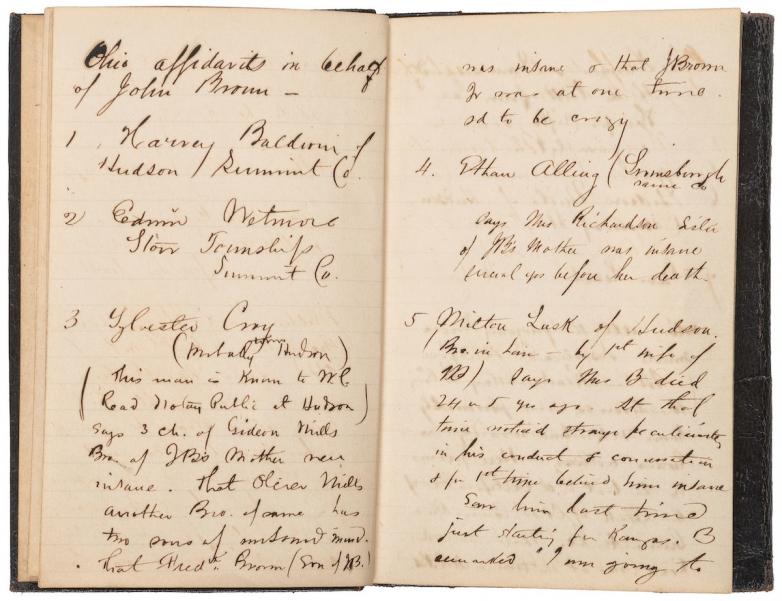 An archive of materials mostly related to abolitionist George H. Hoyt's work as an attorney for John Brown. Estimate: $4,000-6,000

The sale includes recorded speeches, press photographs, posters, books, a pennant, illustrated (comic) books and more documenting Dr. King and his various campaigns, most notably the marches from Selma to Montgomery, Ala., and the March on Washington for Jobs and Freedom.

Highlights of the sale include a photograph of Dr. King locking arms with his aides while leading the march to the Montgomery, Ala. courthouse (lot 191; estimate is $1,000-2,000). Another noteworthy piece is a sixth plate daguerreotype of Joseph Jenkins Roberts, the first and third president of Liberia (lot 82; estimate is $10,000-15,000). The archive of Lieutenant Colonel George Henry Hoyt is another standout item (lot 46; estimate is $4,000-6,000). Hoyt most notably acted as one of John Brown's attorneys when the martyred abolitionist stood trial for the raid at Harper's Ferry, Va. Included in the archive are a journal with Hoyt's hand-recorded testimonies from Brown's relatives, former neighbors and old acquaintances, and a scrapbook containing newspaper clippings reporting on Hoyt and the trial. Other notable items include a Black Panther carved rally stick (lot 230; estimate is $300-500), and a quarter plate tintype of two young girls, one African American and one white (lot 84; estimate is $800-1,200).

Marcus Garvey, founder and first President-General of the Universal Negro Improvement Association and African Communities League, is featured prominently in the sale. Signed letters, a broadside, and objects from his Black Star Line are featured in the 14 lots identified to Garvey. Madam C.J. Walker, the first female self-made millionaire in the United States, is also represented through five lots associated with her line of cosmetics and hair care products.

Bidding for the February 18 auction will begin at 10:00 am ET. Bidders will be able to participate via absentee bid, by phone, or live online on Cowan’s website. Previews for the auction will be available at Cowan’s facilities by appointment only. For more information about the auction, please view the auction page and the catalogue.