Collection of Space Correspondent Tim Furniss Up for Auction 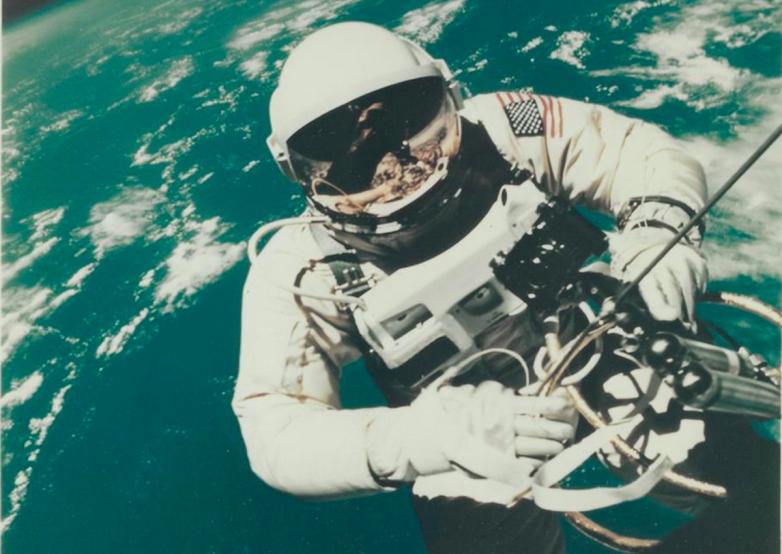 Iconic image of Ed White captured in first photograph taken by a human being in space (James McDivitt). Estimate £1,000-2,000

Newbury, Berkshire, England — A private collection of space photographs and memorabilia from the late space correspondent, writer and space aficionado Tim Furniss, who witnessed pioneering space moments first-hand, is among a vast selection of unique photographs of man’s very first moments in space. This exciting auction of Space Exploration Photography & Ephemera will take place at Dreweatts on February 22, 2022.

Tim Furniss’ interest in space started at age 12, when, during an outing with his grandmother in 1961, they passed a television shop and saw Yuri Gagarin the first man in space, on the news. This instigated a lifelong fascination with space, which would later lead him into the role of ‘spaceflight correspondent’ for Flight International magazine from 1984-2006, reporting on the very subject that he loved. Tim was also a broadcaster, lecturer and author of over 35 published books on space history. His role and lifelong enthusiasm for space, combined with sheer tenacity, gained him access to some astounding historical moments in space history and the opportunity to build a rapport with some of the most celebrated astronauts of our time.

Offering the collection is Tim Furniss’ son, Thomas Furniss, who has been tasked, alongside his sister, with curating his father’s lifetime project of scrapbooks, photographs and space ephemera gathered over decades. On recalling one of many anecdotes about his father Thomas Furniss tells us, “When he travelled to the US to cover the launch of Apollo 13 at age 22, he crawled through the legs of a hoard of journalists to take a series of pictures of the crew before transferring to the launch pad. Upon leaving, my dad was given an ‘Apollo Operations Manual’ for a space suit, to help with his reporting - something he no doubt asked for and this very item will be available at auction as Lot 166”.

He also recounts that on the same trip a few days later, brandishing his journalist credentials, he managed to talk his way into a sub-branch of NASA, where he given a tour of the building, and asked if he could try a suit on! His wish was granted and he was given the suit and gloves closest to his size, which turned out to be those of the astronauts Bill Pogue and Frank Borman.

Not surprisingly amongst Tim’s collection is a photographic portrait of the man that inspired him, Yuri Gagarin, dated April 12, 1961. The vintage gelatin silver print shows Yuri smiling as he attains the title of the first man to ever go to space. It has a conservative estimate of £200-£300 (lot 18).

Amongst many photographs of historic moments is the first frame from a photographic sequence documenting the first American spacewalk, depicting Ed White floating in zero gravity over Hawaii. Taken by fellow astronaut James McDivitt on June 3rd, 1965, this vintage chromogenic print is the first ever photograph taken by another human being in space, as up to this point all released images of astronauts were taken by television or monitoring cameras.

Ed White floated out of the spacecraft wearing a specially designed suit and gold-plated helmet to protect him against unfiltered rays of the sun, as well as emergency oxygen tank. A 25-foot long umbilical line and a tether line connect him to the spacecraft. He used a Hand-Held Manoeuvring Unit (HHMU) to manoeuvre around the spacecraft at more than 100 miles (160 kilometres) above the Pacific Ocean, while James McDivitt took photographs. Aside from being a milestone experiment, this was a thoroughly enjoyable experience for White and he returned to the spacecraft reluctantly commenting: 'It's the saddest moment in my life'. The photograph is one of the most iconic and well-recognised images and carries an estimate of £1,000-£2,000.

Elsewhere in the sale are some very important photographs from key moments in the history of space. Commenting on the sale, Ania Hanrahan, Dreweatts specialist in charge of the Sale, tells us: “In over 430 lots the sale unravels the story of human endeavours to discover what lies beyond our home planet, from early rocketry engineering by the forefathers of space exploration to complex interplanetary missions. Although today space photography and video footage appear to be a part of our daily news feeds, it was only few decades ago that we had the chance to see what our planet looks like from space for the very first time. In those days space photography was a source of awe, wonder and amazement and had the power to change the way we see Earth and our place in space.”

Among the highlights is the most celebrated image of the earth rising above the Moon's horizon. It is the first Earthrise witnessed by humans and captured in colour on camera. Taken from Apollo 8 on December 24th, 1968 by the astronaut William Anders, this iconic picture shows earth peeking out from beyond the lunar surface as the first staffed spacecraft circumnavigated the moon with astronauts William Anders, Frank Borman, and Jim Lovell aboard. It is estimated to fetch £4,000-£6,000 (lot 145).

One of the most symbolic images of the Apollo program, which featured on the cover of the Life Magazine on the 11 August 1969, was taken on the Apollo 11 mission by Neil Armstrong on July 20th, 1969. It features Buzz Aldrin standing on the surface of the Moon, casting a shadow on the ground, with his gold-plated visor reflecting the Lunar Module and the photographer. This is very rare in such a large format, making it highly sought-after and it remains one of the most well-known images of space around the globe. Its’ popularity and importance is reflected in its’ estimate of £8,000-£12,000 (lot 239).