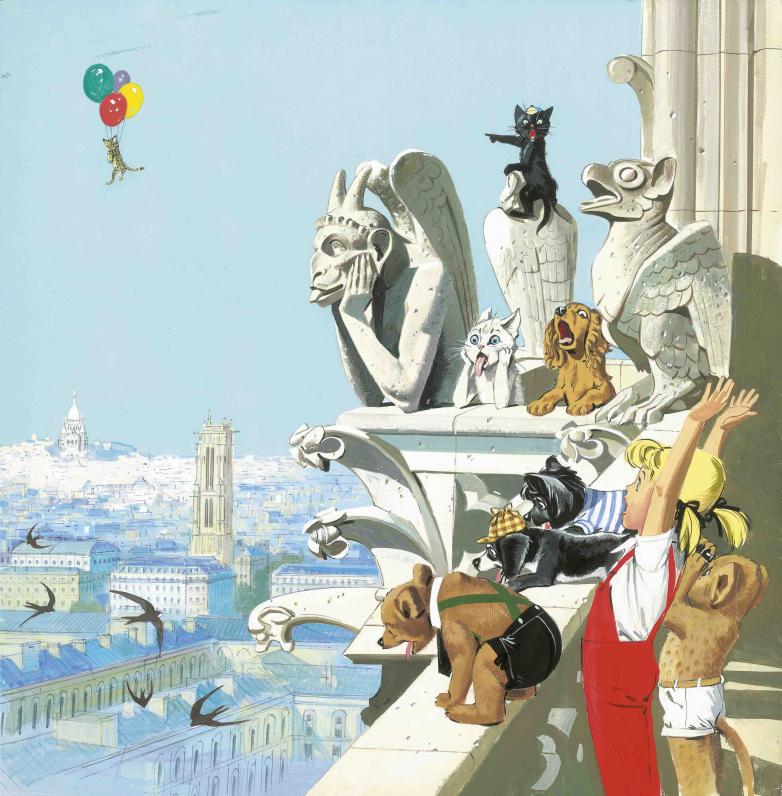 Paris — For its Comic Strips sale, Artcurial will be auctioning, for the first time, a collection of original drawings from the adventures of Caroline. These 22 illustrations, estimated between €3,000 and 6,000 have come directly from the illustrator Pierre Probst’s family.

The auction will also be offering a Tintin Indian ink panel, l’Étoile Mystérieuse, drawn by Hergé, estimated between €150,000 and 200,000. A wonderful historic set of drawings and panels by the famous Japanese mangaka Osamu Tezuka will also be presented, the star being a Captain Ken panel estimated at €30,000 - 40,000 and several Astro Boy drawings. A rare collection of illustrations representing Walt Disney’s famous heroes will also be put on sale. These drawings, created in the 1950-60s, were intended to decorate Jouets Vera’s wooden puzzles.

A collection of 22 original Caroline drawings Pierre Probst (1913-2007), an artist from Mulhouse in Alsace, knew from an early age that he would become a cartoonist. With the first album from the series, Une fête chez Caroline, published in 1953, he immediately experienced a huge success, thanks to his colourful drawings illustrating the life of this little girl, joined at the hip with her talking pets. The heroine’s name was a tribute to the illustrator’s grandmother and he used his daughter, Simone, as the model who inspired her character.

A beautiful panorama of Caroline adventures, which are both educational and fun, will also be presented at the auction. Twenty-two original drawings depict the adventures of the young heroine who sometimes explored the capital city--admiring the breath-taking view from the top of Notre-Dame cathedral or at the foot of the Eiffel Tower--while others recount her going back to Prehistoric times, travelling through Europe or even going on an expedition to the Moon, always accompanied by her four-legged friends who end up getting into mishaps (estimate: €3,000 - 5,000 / €4,000 - 6,000).

At the heart of this collection, nine original drawings created for the Caroline comic book covers will also be presented. We also see the little girl in her day-to-day life, when she learns to ride a horse, or when she enjoys a galette des rois (epiphany cake), as well the young heroine’s exceptional adventures: with the “Lilipuchiens”, on the Moon or in the North Pole... Each cover illustration is estimated between €3,000 and 5,000.

An exceptional panel signed by Hergé
In addition, the auction will also be offering a Tintin panel, l’Étoile Mystérieuse, drawn by Hergé and published in November 1941 in the Le Soir newspaper. This rare article illustrates the famous scene where Tintin observes through a telescope the meteorite which threatens to crash into Earth leading to the end of the world. It is estimated at €150,000 - 200,000.

Fans of Tintin can also get their hands on a bronze sculpture of Tintin et Milou by Nat Neujean, made in 1975 under Hergé’s guidance and estimated at between €50,000 and 60,000, as well as a lithography signed by Hergé and by the American astronauts who walked on the Moon, including Buzz Aldrin’s “First moonwalkers after Tintin” inscription (estimate: €10,000-15,000).

A few days after this auction, there will be an Online Only sale of Comic Strips from 25th to 28th November.