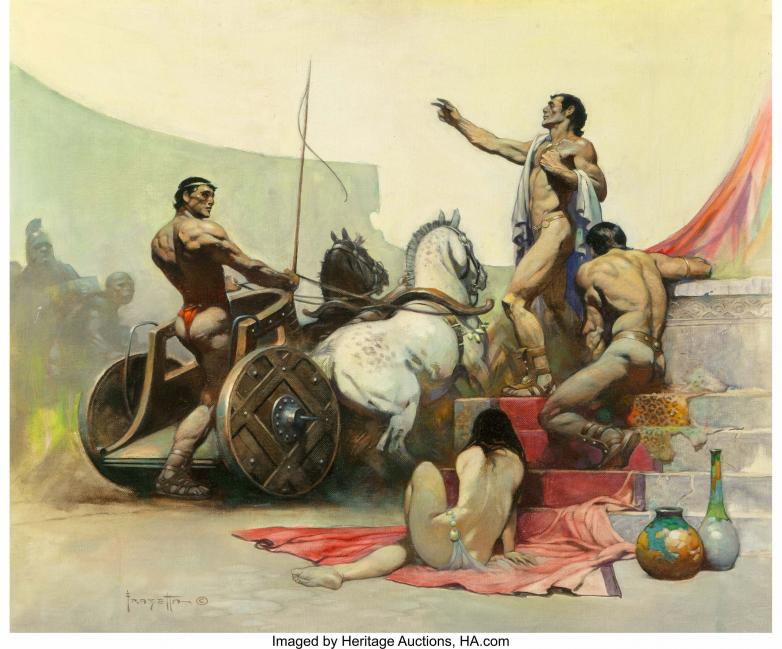 Dallas – An oil painting by iconic American science fiction and fantasy artist Frank Frazetta could bring as much as $400,000, and artwork from the collection of Glynn and Suzanne Crain and the IRI collection should continue their waves of popularity in Heritage Auctions’ Illustration Art Auction Oct. 15 in Dallas, Texas.

Coming to auction for the first time, Frank Frazetta Child of the Sun paperback cover, 1972 (estimate: $200,000-400,000) is an amazing peak-period masterpiece purchased by the current owner in the early 1970s near the time when the book was published, and has been kept in the same collection ever since. The dramatic, multi-figure composition includes more depth and detail than many Frazetta book covers. Included is a beautiful woman, one of the elements many associate with the artist, but also three heroic male figures, as well as a range of intricate background elements, making the image one that can be appreciated as fine art as well as in an illustration context.

Frazetta’s artwork has enjoyed unmatched success at Heritage Auctions: his 1969 Egyptian Queen fantasy painting shattered the record for original comic art May 16 when it sold for $5.4 million in Heritage’s Comics & Comic Art Auction in Chicago.

“The success of Egyptian Queen launched the demand for Frank Frazetta’s work from something for collectors of illustration art to the kind that appeals to collectors of all kinds of art,” Heritage Auctions Vice President Todd Hignite said. “Specific to this auction, it helped to lay the foundation for the groundswell of demand for the Child of the Sun cover image.”

James Allen St. John The Chessmen of Mars book dust jacket, 1922 (estimate: $70,000-90,000) is a dramatic image of a one-sided battle in which a warrior on horseback prepares to skewer his opponent as he falls to the ground with a blood-drenched sword. The image, which comes from the Crain collection, is signed lower right by the artist and was published as the book dust jacket of The Chessmen of Mars by Edgar Rice Burroughs (A.C. McClurg & Co., 1922), making it one of the most desirable paintings by the artist known to exist.

The demand for the items in the Crain collection could soar; numerous auction records were shattered in The Glynn and Suzanne Crain Science Fiction Collection Auction Aug. 13-14.

Renowned pin-up artist Alberto Vargas has several works featured in the sale, including Martini Time, 1935 (estimate: $40,000-60,000). The 27-by-20-inch watercolor and pencil on paper evolved from drawings done in the 1920s and was in the artist’s possession when he died in 1982. The fact that it was not commercially commissioned meant Vargas had full artistic freedom. The image was reproduced on page 84 of Vargas, by Alberto Vargas and Reid Austin (1978) and on page 49 of Vargas (Taschen, 1990).

The collection from Investment Rarities Incorporated founder Jim Cook and his wife, Diane, includes 126 lots in this sale. The Cooks have fostered a reputation as elite collectors in numerous categories, including Fine Art, Comic Art, Sports and Entertainment. Thanks to their reputation for their ability to identify both quality and rarity in their collection, which in this sale includes works by an array of artists, including Hugh Joseph Ward, Gil Elvgren, Alberto Vargas, Harry Lemon Parkhurst, Walter Beach Humphrey and Rolf Armstrong. Some of the top lots in the sale from the IRI collection include, but are not limited to:

One of the most popular and acclaimed pin-up artists of the 20th century was Gil Elvgren, whose entries in the auction include I've Been Spotted (Lasting Impression), 1956 (estimate: $40,000-60,000). The oil on canvas was reproduced as Figure 367 in Gil Elvgren The Complete Pin-Ups by Charles G. Martignette and Louis K. Meisel (Taschen Books, 1996.) Other top Elvgren offerings in the sale include:

American illustrator Hugh Joseph Ward, who usually signed his works with only his initials, “H.J. Ward,” also has multiple works featured in the sale. Ward is known for his cover art for pulp magazines, especially for Spicy Mystery, Spicy Detective and other titles published by Harry Donenfeld in the weird menace genre.

Hugh Joseph Ward Loot for the Lords of Doom, Spicy-Adventure Stories cover, August 1940 (estimate: $30,000-50,000) is a very rare science fiction painting by the artist, and part of the Crain collection, while Hugh Joseph Ward The Price, Spicy-Adventure Stories, July 1935 (estimate: $30,000-50,000) comes a group of outstanding pulp and magazine art from the IRI Collection.