Christie’s to Offer a Selection of Woolf First Editions 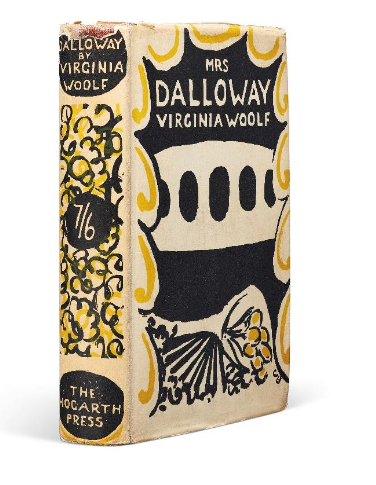 New York – On April 21, a rare selection of books written by the influential author Virginia Woolf (1882 – 1941) will be offered as part of the Fine Printed Books and Manuscripts including Americana sale, during Classics Week. Woolf is recognized as one of the most innovative writers of the 20th century, whose work explores modernism, including gender roles, the subconscious, time, perception, and the impact of war.  Highlights include two of her best known works, Mrs Dalloway (1925) and To the Lighthouse (1927), which are signed first editions. The jackets are colorful and striking and were designed by Woolf’s sister, artist Vanessa Bell.

Virginia Woolf was born into an affluent home in South Kensington, London. After her mother’s death and encouraged by her father, Woolf began writing professionally in 1900. As a pioneer in the use of stream of consciousness as a narrative method, her work provides insight into her characters and the author’s thought process.

She was an important part of London's literary and artistic society and adopted a free-spirited lifestyle. Together with her husband Leonard Woolf, the literary couple were part of the Bloomsbury Group – an influential collective of English writers, intellects, artist, and philosophers.

Other highlights include a lovely collection of first editions from Virginia Woolf, including her first novel, Voyage Out (1919), and two signed limited editions, including Beau Brummel (1930) and Street Haunting (1930).

The public view will open in Christie’s Rockefeller Galleries in New York from Friday, April 17 to Tuesday, April 20.