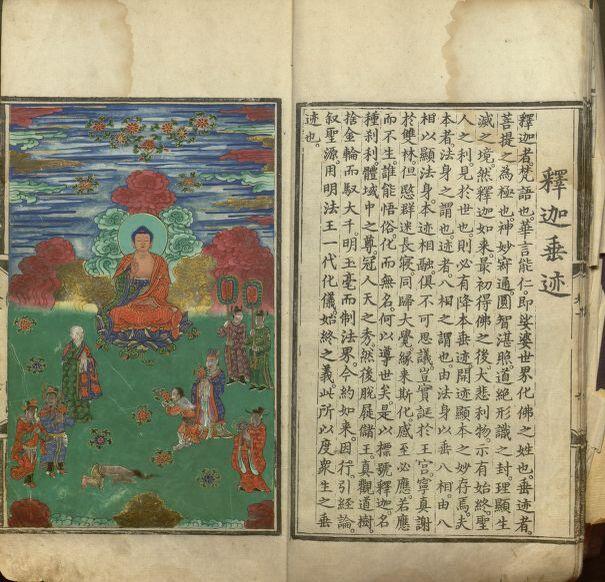 The Chinese Rare Book Collection features a woodblock-printed work in four volumes with paintings vividly colored by hand accompanied by a page of descriptive text.

In celebration of Asian Pacific American Heritage month, the Library of Congress has digitized and made available online 1,000 Chinese rare books produced before 1796. The Chinese Rare Book Digital Collection includes the most valuable titles and editions housed in the Library’s Asian Division, some of which date as far back as the 10th century and are the only extant copies in the world.

The collection can be accessed at loc.gov/collections/chinese-rare-books/about-this-collection/.

“These digitized China rare books represent not only some of the most important works of Chinese scholarship before the 18th century, but they are also fine examples of early printing,” said Qi Qiu, head of Scholarly Services at the Library’s Asian Division. “The free, downloadable high-resolution images offer users across the globe unprecedented access to the study of pre-modern China that would otherwise be off-limits due to physical distance or rarity of the items.”

The collection features a woodblock-printed work in four volumes with paintings vividly colored by hand accompanied by a page of descriptive text. This item, known as “Life and Activities of Shakyamuni Buddha Incarnate,” contains about 400 illustrations that depict the life of Gautama Buddha, his ministry, the spread of Buddhism to China and the reception of Buddhism by Chinese emperors and officials.

Other illustrated works are the “Pictures of Tilling and Weaving,” which feature ink and color paintings on silk by Qing dynasty court painter Jiao Bingzhen (1650-1726), depicting traditional methods for cultivating rice and producing silk.

One of the very rare titles is a complete edition of effective medical remedies tested by generations of physicians. It is considered one of the most influential works of remedies of traditional Chinese medicine, introducing innovative methods like suspension traction treatment for bone fracture repair. It was disseminated to Japan, Korea, and Europe after it was printed in 1343.

The Chinese Rare Book Digital Collection contains nearly 2,000 titles, out of the more than 5,300 titles of rare Chinese books housed at the Library’s Asian Division. While the initial online presentation includes about 1,000 digitized rare titles, more will be accessible in the future.

The Library of Congress digitized these Chinese rare books in collaboration with the National Central Library of Taiwan in recognition of the collection’s value as a major resource for the study of pre-modern China. This online collection reflects the advancement toward a goal in the Library’s new user-centered strategic plan: to expand access, creating valuable experiences for every user to foster lifelong connections to the Library. Other recently announced strategic initiatives include the digitized Persian Manuscripts Collection and By the People, a digital transcription tool.