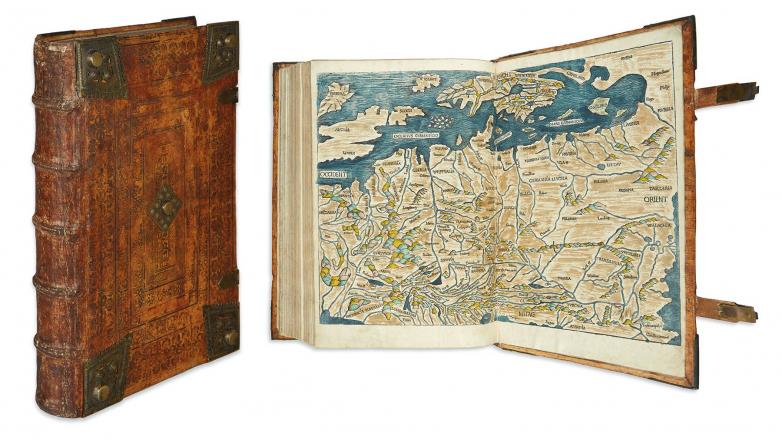 The sale is led by Hartmann Schedel’s Liber Cronicarum cum Figuris et Ymaginibus ab Inicio Mundi, Nuremberg, 1493, at $40,000 to $60,000—the Nuremberg Chronicle traces the world history from Biblical Creation to the time of publication. Further atlases include Claudius Ptolemaeus’s Geographicae Enarrationis Libri Octo., Lyons, 1535 ($20,000-25,000); the second volume of Joan and Willem Blaeu’s Novus Atlas—Toonneel des Aerdrycx, oft Nieuwe Atlas, Tweede Deels, Tweede Stuck, Amsterdam, 1658—comprising of France, Spain, Asia, Africa and America; and Thomas Jefferys’s The American Atlas: Or, a Geographical Description of the Whole Continent of America, London, 1776-77 ($10,000-15,000 each). Also of note is an 1840 Hawaiian-language school geography map from the Lahainaluna Seminary, making its auction debut at $2,500 to $3,500.

Standouts from the extensive offering of United States cartography includes A New and Accurate Chart of the Bay of Chesapeake, Boston, circa 1803, by John and William Norman, available at $18,000 to $22,000; the 1777 French issue of John Mitchell’s influential 1755 map of colonial North America by Georges Louis le Rouge is present in eight unaltered publisher’s sheets at $10,000 to $15,000; and Thomas Bakewell’s scarce 1748 map of North and South America, embellished with pictorial panels, is expected to bring $8,000 to $12,000.

A run of high-quality Currier & Ives prints shines in an offering of historical prints and drawings. Most notable is a selection of prints that were exhibited at the 1990 Milwaukee Art Museum show Currier & Ives: Best Fifty Revisited. An impressive group of large folio hand-colored lithographs include The Mississippi in Time of Peace, 1865, depicting flatboats and paddle steamers relaxed under a glowing post–Civil War sunset ($6,000-9,000); The Champions of the Mississippi, A Race for the Buckhorns, 1866, portraying a dramatic steamboat race with the Queen of the West and Morningstar neck-and-neck for the lead ($4,000-6,000); and “Wooding Up” on the Mississippi, 1863, showing the steamboat Princess docked at a supply yard loading fuel wood ($4,000-6,000). Also featured is Ice-Boat Race on the Hudson, circa 1870, a small hand-colored lithograph of daring ice-boaters slashing down the frozen Hudson River challenging the speed of a steaming locomotive.

Oddities, instruments and ephemera complete the sale, with 12 geography-related puzzles, games and trivia card sets, including “United States Geographical Lotto,” circa 1920, and “A Game of Cities,” 1889 ($300-500), as well as a polished steel collapsible standing magnify glass made by Laban Heath, perfect for examining bank notes, minerals, flowers, seeds and maps ($1,000-1,500).

Exhibition opening in New York City December 12. The complete catalogue and bidding information is available at swanngalleries.com and on the Swann Galleries App.