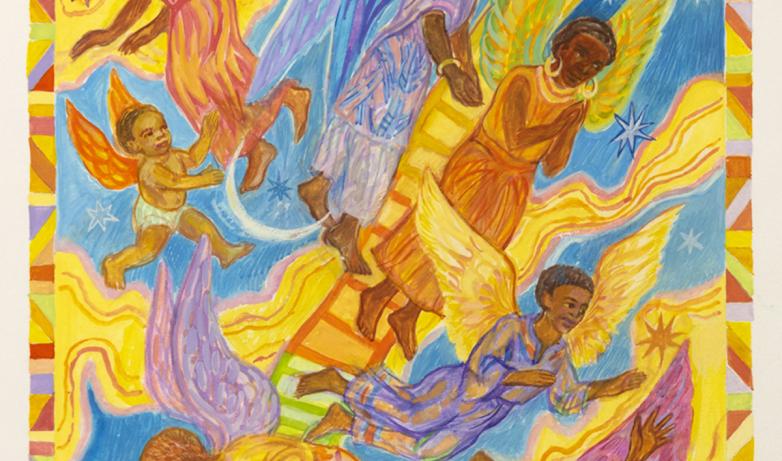 Amherst, MA – Ashley Bryan has committed his life to filling the void of Black representation in children’s literature. Since the 1970s, the celebrated artist and author has shared the rich heritage of spirituals, miraculous songs of faith and resistance born from the horrors of enslavement. Frustrated when he couldn’t find any collections of spirituals for young readers, Bryan set out to illustrate the songs himself. The Eric Carle Museum of Picture Book Art is pleased to present Ashley Bryan in Song, opening this Saturday, June 12, 2021 and on view through November 7, 2021 in the Central Gallery. 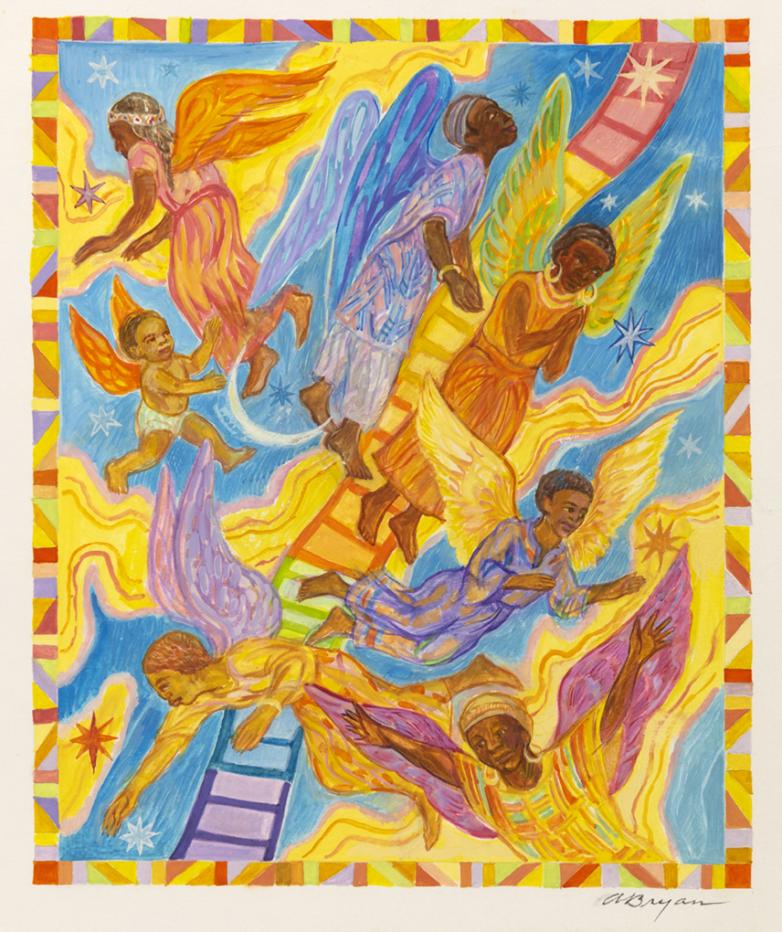 The exhibition features Bryan’s visual interpretations of spirituals in various media including linoleum block prints, tempera paint, and vibrant cut-paper collage. Bryan has written and spoken extensively on spirituals, and the exhibition is told in his own words by drawing quotations from his many publications and interviews.

Bryan, now 97, says, “During centuries of the slave trade, millions of Africans were seized and sold into slavery in America. They were thrust into an alien environment, separated from family and friends, forbidden the use of their native languages, and denied the customs that gave meaning to their lives. They worked from the dark of day to the dark of night. The enslaved were not permitted to read or write. But they had freedom of the mind, a gift to be expressive, to offer something creative of their lives. And they created songs called spirituals. These extraordinary songs are now loved and sung throughout the world.”

Bryan masterfully captures the rhythm and emotional resonance of spirituals. Hand-carved linoleum prints depict the songs “Little David,” “Go Down Moses,” "Nobody Knows the Trouble I See,” “Let Us Break Bread Together,” “In His Hands,” and “Walk Together Children,” among several others. He made prints to recall wood engravings of the medieval era, a time “when it is said all art was created for the greater glory of God.” Bryan chose bright tempera paint for his images in What a Morning! The Christmas Story in Black Spirituals and Climbing Jacob’s Ladder: Heroes of the Bible in African American Spirituals to suggest the luminosity of early French illuminated manuscripts. And he created the illustrations for Let It Shine: Three Favorite Spirituals in cut-paper collage because he wanted a material “that children also work with, and collage is natural to children.”

Chief curator Ellen Keiter says, “It felt important that the exhibition center Ashley’s voice, his knowledge of spirituals and his storytelling, which is why the labels are in his words. Through text and image, Ashley’s illustrations tell the important history of spirituals and the perseverance of enslaved people through song.”

Bryan writes, “Though rooted in the ordeal of slavery, the spirituals are testimony to the genius of enslaved people. The songs allowed them to remain human and creative through adversity. We stand today in the light of achievement."

Bryan generously donated all but one of the artworks on view in the exhibition. Guests to the show will hear historic recordings of spirituals dating from the early 20th century to the civil rights movement of the 1960s and featuring such legendary singers as Marian Anderson and Fannie Lou Hamer.

The Carle has showcased Bryan’s art in several previous exhibitions, most recently Let’s Talk! Animals from the Collection (2020), Our Voice: Celebrating the Coretta Scott King Illustrator Awards (2019), Treasures from the Collection: A 15 Year Celebration (2015), as well as the traveling exhibition Painter and Poet: The Wonderful World of Ashley Bryan at the High Museum of Art in Atlanta (2017) and the Portland Museum of Art in Maine (2018).

About Ashley Bryan:
Ashley Bryan doesn’t speak his stories, he sings them, fingers snapping, feet tapping, his voice articulating. His entire body is immersed in the tale.

Born in 1923, Bryan was raised in the Bronx, NY. At seventeen, he entered the tuition-free Cooper Union School of Art and Engineering, having been denied entry elsewhere because of his race. Encouraged by supportive high school teachers, Bryan was told, “Apply to Cooper Union; they do not see you there.” Admission was based solely on a student’s exam portfolio.

Drafted out of art school into the segregated US army at age nineteen, Bryan preserved his humanity throughout World War II by drawing, stowing supplies in his gas mask when necessary. After the war, Bryan completed his Cooper Union degree, studied philosophy and literature at Columbia University on the GI Bill, and then went to Europe on a Fulbright scholarship, seeking to understand why humans choose war. In 1950, the renowned cellist Pablo Casals agreed to break the vow of silence he had taken after Franco came to power in his native Spain. Bryan was permitted to draw Casals and his fellow musicians during rehearsals in Prades, France, where Casals was in exile. Through the power of Casals’ music sessions, something “broke free” for Bryan: “I found the rhythm in my hand.”

Bryan returned to the United States, teaching art at several schools and universities, retiring in the 1980s to Maine’s Cranberry Isles as professor emeritus of Dartmouth College.

In an article for The Horn Book Magazine, Caitlyn Dlouhy, his editor writes, “He had discovered a hole in children’s literature. There were no introductory books of African American spirituals. There were no stories from the African oral tradition. The translations he found were academic. Dust in the throat. … He couldn’t duplicate the oral traditions of Africa, so he set out on a mission to create something for a new audience: beautiful books to be read and shared aloud … Ashley had bridged time and space, bringing past and present together to create a new voice, born of an ancient one.”

Among Bryan’s numerous honors are the Coretta Scott King–Virginia Hamilton Lifetime Achievement Award, the Children’s Literature Legacy Award, a Newbery Honor for his picture book Freedom Over Me, and the New York Public Library’s Literary Lions award. Throughout the United States and Africa, libraries, children’s rooms, and literary festivals are named for him. As much as Bryan is humbled by these honors, it is the joy of creation, the excitement he sees in children’s eyes, that delights him most.