The British Library Acquires the Visual Archive of Mervyn Peake 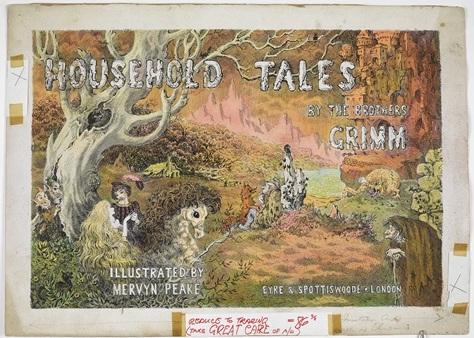 Estate of Mervyn Peake. Courtesy of the British Library

The dust jacket design by Mervyn Peake for Household Tales by the Brothers Grimm.

London — The British Library has announced that the visual archive of writer, artist and illustrator Mervyn Peake (1911-1968) has been acquired for the nation from the Peake Estate, with the generous assistance of donations from Art Fund, with a contribution from the Wolfson Foundation and a contribution in memory of Miranda Stonor, the National Heritage Memorial Fund, the British Library Collections Trust, and the Friends of the National Libraries. This news follows the Library’s acquisition of Peake’s literary archive in 2010.

Mervyn Peake’s Visual Archive comprises over 300 original illustrations, including drawings from his critically acclaimed Gormenghast series, together with original illustrations for his own books for children Captain Slaughterboard Drops Anchor and Letters From a Lost Uncle and other classic works of English literature, such as Treasure Island, The Hunting of the Snark, Household Tales by the Brothers Grimm, and Dr Jekyll and Mr Hyde. Also included are unpublished early works, preliminary sketches, and drawings of famous literary, theatrical and artistic figures such as Laurence Olivier and W.H. Auden. This acquisition brings Peake’s archive together in one place, making it fully accessible to the public for the first time.

Mervyn Peake was an English writer, artist and illustrator, best known for creating the fantasy trilogy Gormenghast. A Royal Academy trained artist of great versatility and inventiveness, he has been seen as arguably the finest children’s illustrator of the mid-20th century. Combining technical mastery with an innate ability to evoke fear, delight and wonderment in young readers, he redefined the cosy nature of children’s book illustrations.
Despite his originality, Peake’s fondness and respect for the work of other artists is evident in the archive, from the influence of Hogarth, Doré and Blake to Dickens’ illustrator Phiz and Boys’ Own artist Stanley L. Wood.
The archive is notable for Peake’s exquisite Treasure Island illustrations from 1949, which remain some of his finest work, described by critics as ‘tense, eerie and dramatic’ and ‘one of the few editions which have come near to meeting the demands of the author’s text’. Treasure Island was Peake’s favourite book and his love for the story is evident in the archive from the watercolour illustrations he painted aged 15, to the large number of preliminary sketches and annotated proofs which show his commitment to perfecting the 1949 edition.

Peake also wrote and illustrated original works for children including Captain Slaughterboard Drops Anchor (1939), Letters from a Lost Uncle (1948) and a book of nonsense verse, Rhymes Without Reason (1944). The illustrations for all three books are present in the archive, offering a window into Peake’s playful and eccentric sense of humour as well as his aptitude for creating anthropomorphic creatures. Captain Slaughterboard has been credited as being ‘way ahead of its time’ as a book about a pacifist pirate who strikes up a relationship with an ambiguously-gendered Yellow Creature.

Drawings for an unpublished early work called The Moccus Book (1929) reveal Peake’s talent for creating fantasy worlds, and also show the importance of his early influences in his development as a writer and artist. His childhood in China, his love of reading, and his obsession with islands and isolation are all significant presences in the Moccus books as well as many of his later successes.

Highlights of the archive include:
•    27 illustrations, plus preliminary drawings and annotated proofs for Treasure Island, some of Peake’s finest illustrations
•    10 illustrations of Gormenghast characters
•    Illustrated early draft manuscript of Peake’s pirate children’s book Captain Slaughterboard Drops Anchor together with a complete set of final illustrations, in which Peake included hidden portraits of himself and his family in one of the pirate’s tattoos
•    Juvenilia including watercolour illustrations of his favourite book Treasure Island, and his earliest surviving drawing depicting people he encountered on a Sunday afternoon walk while living in China, aged 7
•    Drawings for early unpublished work The Moccus Book revealing his talent for creating fantasy worlds
•    Illustrations and preliminary drawings for Lewis Carroll’s The Hunting of the Snark
•    Watercolour illustrations for television adaptation of his children’s book Letters From a Lost Uncle
•    Illustrations for his 1953 magical realist novel Mr Pye
•    Drawings of 15 well-known writers, artists and theatrical figures including Laurence Olivier, W H Auden and Peggy Ashcroft

The Mervyn Peake Visual Archive joins the Library’s extensive collection of contemporary literary archives, with acquisitions in recent years including the papers of Andrea Levy, Hanif Kureishi, Shiva Naipaul, James Berry, Margaret Forster, Will Self and Ruth Prawer Jhabvala. It complements the Library’s existing holdings by bringing together Peake’s work on a number of books, enabling further study of his synesthetic creative process whereby he drew pictures to stimulate his writing. Peake’s illustrations for Lewis Carroll’s The Hunting of the Snark (1941) will join his drawings for Alice’s Adventures in Wonderland and Through the Looking Glass which are already held by the Library, together with Lewis Carroll’s original manuscript ‘Alice Underground’ and the manuscripts of another master of nonsense verse, Edward Lear.

The Visual Archive will be available for research on completion of cataloguing in 2022. There will be an opportunity to see highlights from the archive in future British Library exhibitions.

Zoë Wilcox, Curator of Contemporary Performance and Creative Archives at the British Library, said: ‘Mervyn Peake sits in the great tradition of writer-artists like William Blake and Edward Lear for whom drawing is integrated into their writing process. Therefore it feels only right that this archive of illustrations should join the rest of Peake’s papers here at the British Library. In particular they convey how his sense of humour and idiosyncratic imagination made him the perfect illustrator and writer of children’s books, willing to risk scaring his readers while also making them laugh.

Peake’s work has influenced creative artists working across many different genres from Neil Gaiman and Angela Carter to The Cure, and I hope that acquiring his Visual Archive for the nation will inspire many more budding creatives to be as boldly individualistic as he was.’

Fabian Peake, artist, writer and son of Mervyn Peake, said: ‘The family of Mervyn Peake is thrilled and delighted that his Visual Archive has been acquired by the British Library. The acquisition is doubly exciting because it will join Mervyn Peake’s Literary Archive which was bought by the Library a few years earlier.

It is wonderful to know that so much of his work is housed in this illustrious institution. This acquisition, together with the Literary Archive, acknowledges the breadth and depth of Mervyn Peake’s work, demonstrating his complete command over literature, illustration poetry, theatrical work and many other art forms.

Mervyn Peake’s visual work covers a vast range of human qualities and attributes – from the absurd to the portentous; from the loosely informal sketches to the heights of his technical abilities as a draughtsman. The British Library now holds a world-class collection of Mervyn Peake’s major work.’

Jenny Waldman, Director, Art Fund, said: ‘With this acquisition the British Library unites Peake’s archives, an exciting evolution of its collection which Art Fund is particularly delighted to support following the key role it played in the Library’s acquisition of the literary archive in 2010. I’m sure that the extraordinary, imaginative illustrations contained within the visual archive will thrill and inspire British Library audiences for generations to come.’

René Olivieri, Interim Chair of the National Heritage Memorial Fund, said: ‘Covering the entirety of Peake’s life as an artist and author, this is a fantastic archive of original work and the National Heritage Memorial Fund is delighted to award this grant to bring the collection into public ownership and make it available for all to explore and enjoy.’