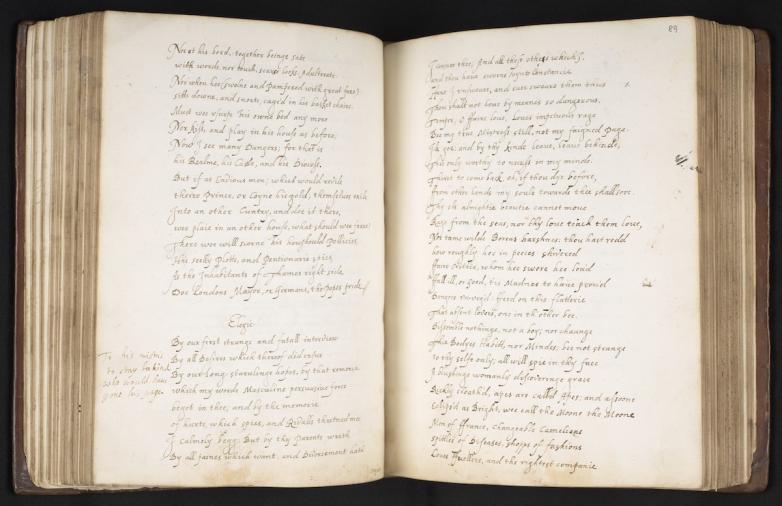 London — The British Library announces it has acquired the Melford Hall manuscript, a rare seventeenth-century volume of poetry by John Donne (1572 – 1631), one of the best known poets of the late Tudor and early Stuart periods.

Discovered in Melford Hall, Suffolk in 2018, the manuscript comprises over 130 poems by Donne and is one of the five largest collections of scribal copies of Donne material. Encompassing the whole range of Donne’s poetical works, the Melford Hall manuscript includes famous verse such as ‘The Calme’, ‘To his Mistress Going to Bed’, ‘The Breake of Daye’ and ‘Sunn Risinge’ and is of outstanding importance to the nation’s heritage.

Created in the early seventeenth century, the 400-page volume features text written in iron gall ink on gilt edged paper and is bound in a quarto gilt panelled calf binding with an oval centrepiece. A contemporary of William Shakespeare, Donne’s poems tended to be copied out in manuscript for circulation among select social groups rather than for publication in print.

Culture Minister, Caroline Dinenage, said: ‘This hugely significant manuscript could not have found a better home than the British Library. I'm delighted that, thanks to the government's export deferral scheme, this acquisition has been made possible and John Donne experts and enthusiasts can learn from this rare volume.’

Dr Alexander Lock, Curator of Modern Archives and Manuscripts at the British Library, said: ‘The British Library’s mission is to make our intellectual heritage accessible to everyone and the discovery of this collection of poems presents a major new resource for scholarship. The Melford Hall manuscript provides evidence as to how Donne’s poetry was written, copied and circulated, as well as helping to further shape our understanding of his audiences and patrons.’

René Olivieri, Interim Chair of the National Heritage Memorial Fund, said: ‘Following its discovery in Suffolk in 2018, the National Heritage Memorial Fund is delighted to support the British Library in the acquisition of this rare manuscript of John Donne’s works. In the year that marks the 40th anniversary of the NHMF we are proud that this important piece of scholarly heritage is among the wide range of iconic artefacts that NHMF has played a vital role in saving for the nation.’

The Melford Hall manuscript is available online for everyone and will be available to researchers through the British Library’s Reading Rooms in 2021.