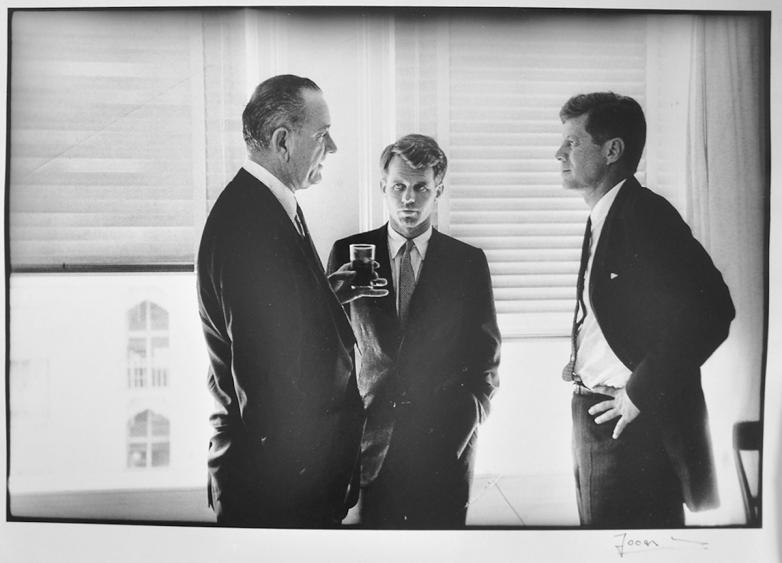 © The Estate of Jacques Lowe

Sen. Lyndon B. Johnson, Robert Kennedy and John F. Kennedy meet during the Democratic National Convention, prior to the official announcement that Johnson would be JFK’s running mate. Los Angeles, Cal., July 14, 1960.

Austin, TX – The Briscoe Center for American History at The University of Texas at Austin has acquired the Jacques Lowe Photographic Archive. Lowe is best known for his photographs documenting the Kennedy family, notably John F. Kennedy’s presidential campaign and his first year in the White House. The collection spans the entirety of Lowe’s career and includes his award-winning portrait photography, as well as editorial, advertising, and corporate work.

“The Lowe Archive is a significant addition to the center’s photojournalism and documentary photography collections,” said Don Carleton, executive director of the Briscoe Center. “It is hard to overstate the importance of Lowe’s work in shaping the public image of the Kennedy family. However, this collection holds an even greater significance for historical research. Like so many of our photojournalism collections, Lowe’s entire career provides critical visual evidence for the study of the recent past.”

“Jacques Lowe was a wonderful friend to our family,” said Kerry Kennedy, Robert F. Kennedy’s daughter. “His photographs capture the magic of my childhood, and we are grateful for his presence in our lives. He played an essential role in telling the story of the Kennedy family in a way that people could easily understand. His beautiful images reflect their belief in service to their country, a commitment to peace and justice, compassion for their brothers and sisters, and devotion to family. It is especially fitting that his work is with the Briscoe Center for American History.”

“My father fully understood that the archive of his life’s work was an irreplaceable treasure,” said Victoria Allen, Lowe’s daughter. “He would be immensely gratified to know that his full body of work can be found in one place, especially one as prestigious as the Briscoe Center. His work will be safely preserved, but more importantly, it will be in an institution that understands the value of making these photos available for teaching and research.”

“Jacques Lowe’s photographs are an essential piece of the Kennedy legacy,” said Stephen Kennedy Smith, nephew of John F. Kennedy. “His work captured our family’s intimate moments, but served a larger purpose. He documented the inner workings of the American political process, from the campaign trail to the White House. We are gratified that his photographs not only will be carefully preserved at the Briscoe Center, but also made available for future generations of students, researchers, and the American people.”

“The Briscoe Center has amassed the single most significant collection of photojournalism from the latter half of the twentieth century,” said Lawrence Schiller, the renowned photographer and film producer who was instrumental in establishing the Lowe Archive at the center. “Jacques was a photojournalist at heart, and he would be thrilled that his work is now in the company of so many of his fellow photojournalists.”

“Jacques Lowe’s photographs are a gift to history. His photo of JFK, RFK, and LBJ at the 1960 Democratic National Convention—with RFK casting a wickedly wary glance at LBJ—encapsulates the toxic relationship between the two men in a way that no words could possibly do justice,” notes Mark Updegrove, president and CEO of the Lyndon B. Johnson Foundation and author of the forthcoming book, “Incomparable Grace: JFK in the Presidency.” “The archive will be a wonderful complement to the vast collection of photographs documenting LBJ’s life at the LBJ Presidential Library, just a hundred yards away from the Briscoe Center.”

Born in Germany in 1930, Lowe emigrated to the United States after spending World War II in hiding due to his Jewish heritage. After winning a Life magazine contest for young photographers in 1951, he began a career as a photojournalist, working for major print magazines. He met with Robert F. Kennedy during one of his editorial assignments in 1956 and the two became friends. In 1958, Joseph Kennedy Sr. approached Lowe with an offer to photograph the political campaign of his “other son.” That son was John F. Kennedy, and that campaign was JFK’s successful bid for the Presidency in 1960. Lowe served as the president’s personal photographer in 1961 but left that position to return to editorial work. The assassinations of Robert Kennedy and Martin Luther King Jr. in 1968 compelled a grief-stricken Lowe to return to Europe and abandon photography for art direction. He returned to the United States and his photo career in the 1980s, becoming one of the most sought-after portrait photographers of the era. Lowe published more than 40 books and photographed hundreds of celebrities in the arts, the theater, film, politics, and business, including his outstanding series of photos on jazz. Lowe died in 2001.

Lowe had placed his negatives in a vault at the J.P. Morgan bank located in the World Trade Center. Only a few months after he died, the World Trade Center was destroyed on September 11, 2001, reducing the bank vault to rubble. While the safe holding Lowe’s negatives was recovered, the contents had been destroyed. The Lowe family painstakingly rebuilt his archive from prints, contact sheets, and other materials stored in his New York City loft.

“While individual prints of Lowe’s work can be found in museums and collections across the globe, the Briscoe Center now holds the comprehensive collection of his career,” said Carleton. “We have close to 6,000 prints, over 2,000 contact sheets, almost 5,000 negatives, and hundreds of pieces of ephemera, including publications, correspondence, and equipment.”

The Lowe Archive is being processed and is closed to research at this time. The center will announce when the collection is open to researchers.