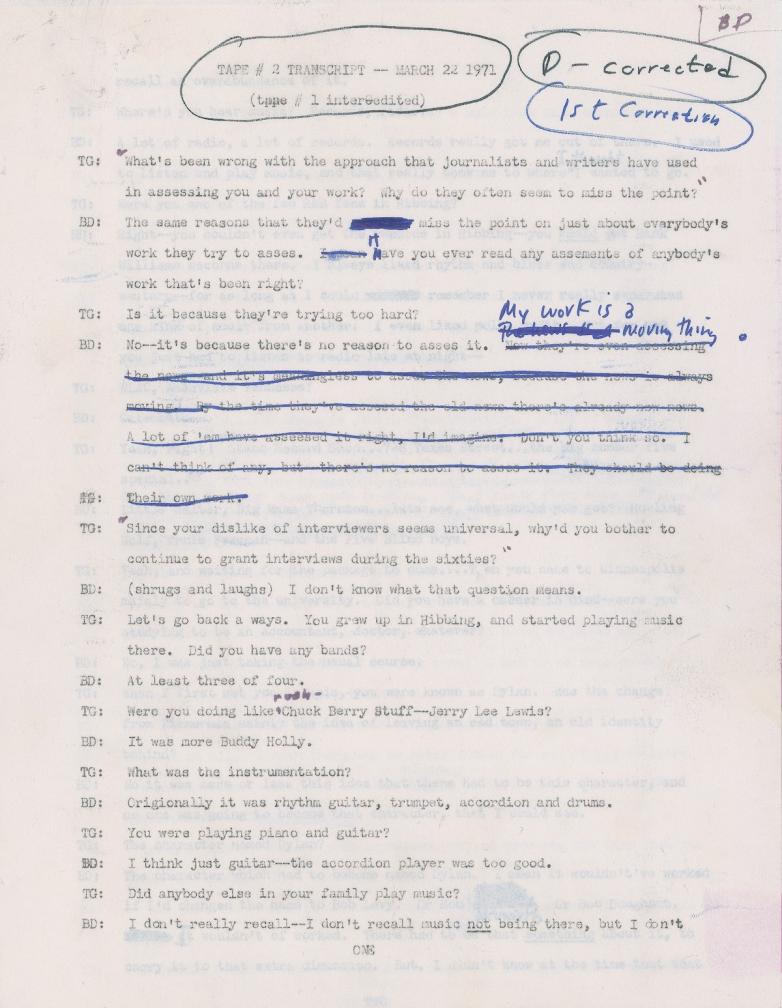 Tony Glover (1939–2019) was a musician, writer, and critic, who befriended Bob Dylan in the Minneapolis coffeehouse scene where they would, on occasion, share the same stage. He was one of the few hometown friends that Dylan stayed in touch with after going to NYC. Dylan dedicated his prose-poem contribution to the 1963 Newport Folk Festival program to Glover, calling him a 'best friend in the highest form.’

Among the top items are early 1960s letters from Bob Dylan to Tony Glover; included is a Dylan signed letter to Glover from January 1962. The one-page handwritten letter thrice-signed from Bob Dylan, with the original hand-addressed mailing envelope, postmarked January 20, 1962, with Dylan striking through the 'Book of the Month Club' address field and writing: "Bob Dylan, Earle Hotel, New York." Letter to blues musician Dave Glover, in part (spelling and grammar retained): "Back now in that city and thinking of all that whistling harmonica music you are making back there in that dungeon hole...Seen ol Dave Ray and sorta introduced him around. We went one time to see John Lee Hooker paying his dues to the blues at Folky City...I was up in Schenectady last week playing and singing—I spent so much money that I went in the hole and had to play an extra nite just to get back to New York... I'm a gonna take Dave Ray to see Gary Davis sometime soon—Dave then would automatically be 10 times better...If you wanna write me—send a letter to Bob Dylan—Earle Hotel—Washington Square North—New York, N.Y. That's about all for now I guess I'm starting to play poker sometimes to pass my worries away—I got about 25 dollars worth of worries now...O.K. S. B. Williamson—if you got time drop a line or something like that." Dylan concludes with a famous quote from Woody Guthrie—" This world is yours, take it easy but take it, Woody Guthrie"—and then adds a signed postscript: "My girlfriend says that you don't sign your full name to friends so􏰃Me, Bob."

Bob Dylan February 1962 subject-rich handwritten letter from a month before releasing his debut album.  The one-page letter signed "I, Me, Bob—161 West 4th Street Apt 3A," February 16, 1962, with the original 'The Normandie, San Juan, Puerto Rico' mailing envelope, addressed by Dylan who adds an arrow pointing to the return address and playfully writes: "That's me all right." Letter to blues musician and close friend Dave Glover, written roughly a month before the release of his self-titled debut album (spelling and grammar retained): "Work out a new tuning on the guitar you gotta hear it to believe it—Big Joe Williams start at Folk City next Tuesday for two weeks. So the Minor Flea or Bee or key or something like that somewhere huh?...There aint much work around here now I aint workin, I'm writing a lot and bummin around—This here place we got got a couch in one room I'd sure like to know when you're a comin'... Times aren't too awful good anywhere right now Rote a new song called The John Birch Paranoyd Blues Dave Ray's still working down the Gaslight hole—times aint too good down there neither...bring a piles load of money with you fill yer trunk up we can use for wood to burn when you get wood's expensive as hell nowadays." He close with a quote from Woody Guthrie: "('Sometimes I feel like a piece a dirt walkin')." This particular quote appears to be unpublished, and was most likely gleaned from lyrics shown to Dylan by Guthrie's wife, Marjorie, when Dylan visited their Rockwood Park home in Queens.

Also included are transcripts of an unpublished 1971 interview hand-annotated by Dylan himself. Included is a typed 37-page transcript of Bob Dylan's interview with Tony Glover on March 22, 1971, extensively annotated by Dylan. On 36 pages, Dylan strikes through passages and pens new thoughts as he revises his own story. The upper right corner is annotated in felt tip by Tony Glover, "BD, D - Corrected, 1st Correction." It also includes an original, uncorrected copy of the transcript.

Among the numerous topics discussed here are critical assessments of his craft—about which he writes, "My work is a moving thing"—early musical influences while growing up in Hibbing, his identity, meeting Woody Guthrie in 1961, the recording of his first albums with producer John Hammond, writing 'Blowing in the Wind' and 'A Hard Rain's a-Gonna Fall,' coverage in the media, the Ali-Frazier fight, walking on the moon, drugs, 'going electric' at Newport in 1965, his motorcycle accident, and his influence on popular music.

After playfully reflecting on changing his name from Robert Zimmerman to Bob Dylan—"I mean it wouldn't've worked if I'd changed the name to Bob Levy. Or Bob Neuwirth. Or Bob Doughnut. It wouldn't of worked.” The archive also includes audiotapes of interviews with Dylan, Hendrix, and The Doors.

Other highlights of the sale are a stage-worn Bob Marley shirt, stage-used guitars of Ace Frehley and Roy Buchanan, a remarkable archive of Johnny Cash letters, a multitude of Beatles pieces, a rare handwritten John Lennon letter lashing out against "Jesus Freaks," and much more.

Online bidding for The Marvels of Modern Music Auction from RR Auction will begin November 12 and conclude November 19. For more information, go to www.rrauction.com.