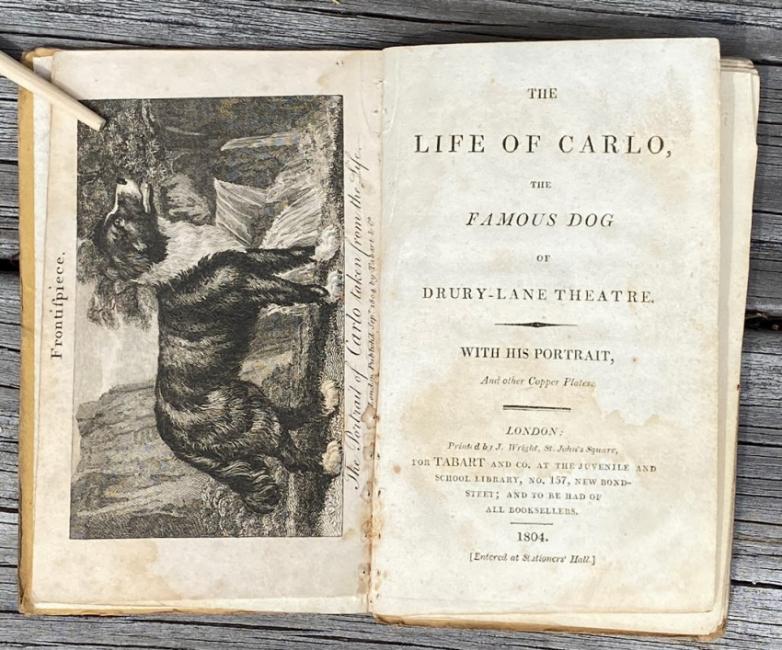 Eliza Fenwick’s The Life of Carlo, the Famous Dog (1804), of which only three other copies are recorded, heads to auction.

Lakeville, CT — In light of the global situation, AntiquarianAuctions.com’s second U.S. sale will focus on connections of all kinds — celebrating what unites us at a time when physical contact can be dangerous, when ideologies can seem irreconcilable. The sale, which will run from May 28th through June 4th, includes over 200 lots of interrelated rare books, manuscripts, artwork, prints and ephemera.

During the COVID-19 pandemic, circumstances have forced both auction houses and book fair promoters to rethink their modus operandi, forcing the bulk of sales to now be conducted online. AntiquarianAuctions.com, with over ten years experience as an online selling and buying platform, is uniquely positioned for this quick but necessary realignment. A hybrid experience that is part book fair, part auction, each sale offers both buyers and sellers the opportunity to connect directly with each other and the opportunity to create longterm relationships. Facilitating this level of open communication places Antiquarian Auctions in a league of its own among other online auctions.

Offerings in their second sale continue to uphold the mantra: “The one constant will be our unwavering commitment to the uncommon and unusual”. The uncommon include Ann Taylor’s My Mother (1807) “a notable rarity” according to Princeton; Eliza Fenwick’s The Life of Carlo, the Famous Dog (1804) three other copies recorded; a de luxe issue of Roald Dahl’s Gremlins, third recorded copy, in addition this copy is signed by General Eisenhower (!); Charles Muss’s ill-fated Thirty-Three Original Designs from Gay’s Fables (c.1824) almost unknown: one copy in the U.S, two in the U.K.; E.T. Bennett’s The Gardens and Menagerie of the Zoological Society Delineated (1831), printed on India paper – only two other copies traced. This sale also regularly goes beyond unusual and ventures into unique: a further selection of artwork from the great Robert Andrew Parker, much of it done for The New Yorker; a savagely beautiful caricature by Ralph Steadman of art historian Lord Clarke, a large scale work which used to belong to Auberon Waugh of Private Eye fame; Samuel Prout’s Sketches at Home and Abroad (1844), a unique copy given to Prout by his publisher, with the plates on India paper; Jean Cocteau does a sketch of The Saint for the character’s creator Leslie Charteris; a large scale photo of Cape Cod by Joel Meyerowitz from Norman Mailer’s estate (1986). The beauty of some items was reason enough to warrant their inclusion in the sale: a Portuguese Embroidered Binding from 1815; Primrose Harley Roper’s watercolor study of Peonies; a mid-19th century memorial album with an oval miniature portrait of Madame Henriette Kann; early photographs of Roman Antiquities sold by Joseph Spithover. All pockets and many interests are catered for: from  $100 to many $1000s; from Moscow to Mexico; from the 17th to the 21st century.

AntiquarianAuctions.com was founded in South Africa in 2010 by rare book dealer Paul Mills, this U.S. affiliate, based in Litchfield County, CT is helmed by Adam Langlands, formerly of Christie’s London. With over 40 years of experience in the rare book trade, Mr. Langlands brings an expert curatorial eye and unique sensibility to each auction.