Talbot Publishing is pleased to announce the publication of an important new title: 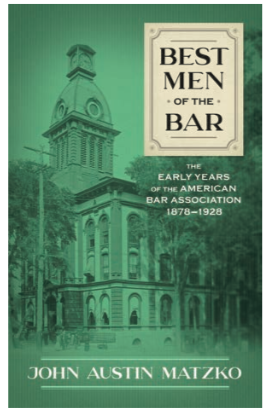 Within a narrative history of the early American Bar Association, Matzko illustrates how the organization endeavored to create a traditional professional gatekeeping organization by gaining control of legal education, entrance examinations, and ethical codes. The early ABA supported reformist values of political and social change if such change could be overseen by courts. It was not until the second decade of the twentieth century that it began its transformation into a more conservative group.

“Matzko’s perceptive and judicious – and sometimes delightfully sardonic – history of the American Bar Association’s first 50 years rescues the ABA from its reputation as a cabal of reactionary corporate lawyers, and reveals it as a club of gentlemanly but moderately progressive law reformers. This book is a really important and informative contribution to the history of the legal profession and of professions generally.”
ROBERT W. GORDON Stanford Law School

“In this penetrating and gracefully-written account of the formative first-half century of the American Bar Association, Matzko actually makes institutional history absorbing – an excellent account of the personalities and ideas that formed the legal profession on a national level, the transition from a ‘Gentleman’s Club’ to a professional association and, in due course, an entity which established widely-shared minimum standards for the quality of legal education and admission to the State bars. Likely to be the definitive account for some time to come.”
WILLIAM E. BUTLER Dickinson Law, Pennsylvania State University

“Skillfully using prosopographic methods, Professor Matzko provides an exhaustively researched and perceptively written institutional history of the American Bar Association in the Gilded Age. His work challenges us to take a new look at this formative period’s impact on the legal profession, on constitutional theory, and on political phiosophy. We have long needed such a close examination of the validity of earlier and more general views concerning the practicing bar in this period. This is a ‘must read’ for all who seek understanding of this sparsely studied but critically important transitional era in American legal and constitutional history.”
HERBERT A. JOHNSON University of South Carolina School of Law

“Deeply researched and nicely written, Best Men of the Bar narrates the history of the first fifty years of the life of the American Bar Association. It is at once a tale of organizational accomplishment, a reflection of American society in the years from 1878 to 1928, and a chronicle of how a small group of elite lawyers advanced the stature of their profession.”
WARREN M. BILLINGS University of New Orleans

THE AUTHOR
JOHN AUSTIN MATZKO received his PhD from the University of Virginia. He taught history for more than forty years at Bob Jones University. His Reconstructing Fort Union was published by the University of Nebraska Press in 2001.