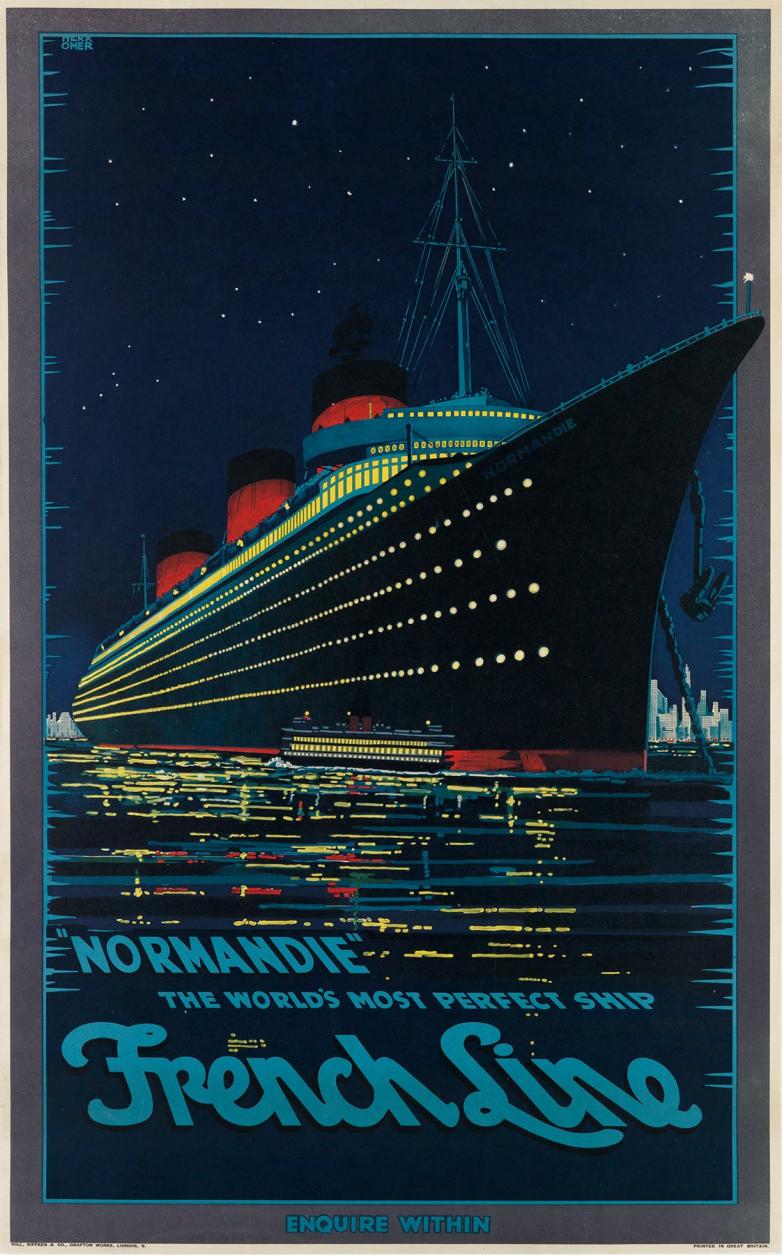 The sale is led by Hubert Herkomer’s 1939 advertisement for the ocean liner Normandie. The rare—and likely last—poster to be created for the end of the ship’s career is expected to bring $15,000 to $25,000. Additional ocean-liner posters of note include Montague Birrell Black’s White Star Line / Olympic & Titanic, circa 1910, which shows the Olympic and Titanic passing at sea ($6,000-9,000), and J.F. Butler’s Panama Pacific Line / New York California via Panama Canal and Havana, circa 1928 ($1,000-1,500).

Destination advertisements to promote tourism from across the globe feature prominently. Travel to Australia is represented by Percival Albert Trompf’s Australia, 1929, which features a view of the beachgoing crowd of Bondi Beach from the vantage point of the front of the former Astra Hotel, expected at $8,000 to $12,000. Kenichi Kuriyagawa’s 1955 tourist poster for Kamaui Lake / Hokkaaido in Japan is present at $800 to $1,200, as well as a circa-1936 advertisement for the Fuji View Hotel in Fuji Hakone National Park by an unknown designer, estimated at $1,000 to $1,500. An early advertisement for Montauk Beach circa 1929 is present at $15,000 to $20,000, while Yellowstone National Park is represented by a 1910 Ludwig Hohlwein poster, at $10,000 to $15,000.

Additional highlights include two rare images which were features in Swann’s inaugural travel poster auction of 1999, which have not been seen at auction since: Hernando G. Villa’s image for the Santa Fe Railroad, The Chief Is Still Chief, circa 1930, and Sascha Maurer’s New York World’s Fair / Thru Grand Central Gateway, circa 1939, both offered at $5,000 to $7,500.

Exhibition opening in New York City November 9. The complete catalogue and bidding information is available at swanngalleries.com and on the Swann Galleries App.