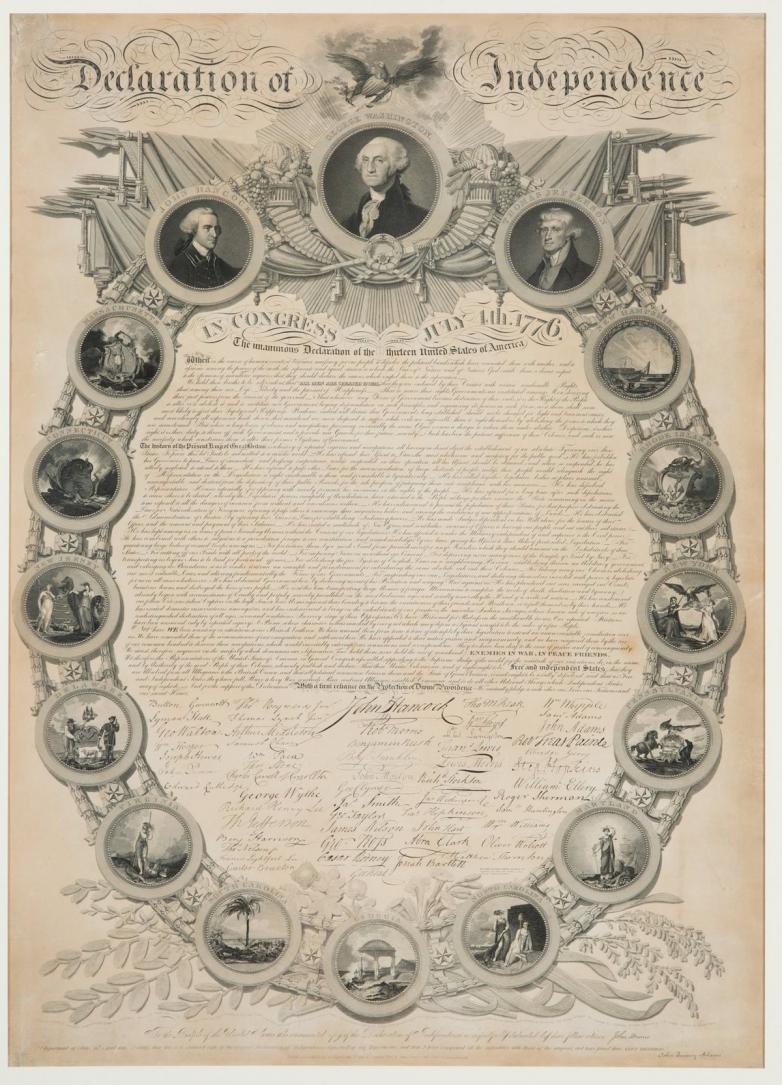 Dallas, TX – A copy of the Declaration of Independence that was published by The Democratic Press publisher John Binns and a daguerreotype of one of the partners whose discovery of gold helped spark the California Gold Rush sold for $30,000 to lead Heritage Auctions’ Americana & Political Auction to $1,182,076 Sept. 14-15.

“Rare and unusual pieces, items that don’t often come to market, did very well in this sale,” Heritage Auctions Americana Director Curtis Lindner said. “The fact that almost 1,500 people bid in this auction and the prices realized throughout proves that the demand for such items remains very high.”

The final price was nearly four times the pre-auction estimate for the Declaration of Independence: John Binns Version Published in 1819, an engraved broadside facsimile of the Declaration of Independence with medallions of seals of the thirteen original colonies forming a decorative oval surrounding the text. At the top are medallion portraits of founding fathers John Hancock, George Washington and Thomas Jefferson, above which is an eagle with shield, olive branch, and arrows holding a streamer reading “E Pluribus Unum.” A Philadelphia journalist and publisher of The Democratic Press, Binns was one of the first to realize, in June of 1816, the potential market for a "splendid and correct copy of the Declaration of Independence, with facsimiles of all the signatures, the whole to be encircled with the arms of the thirteen States and of the United States" (as described in his solicitation for subscribers).

An Important From-Life Daguerreotype of John Sutter, which also carried a pre-auction estimate of $8,000, presents the man who, along with James Marshall, accidentally discovered gold in California, sparking a stampede to the West Coast of people hoping to strike it rich. As it turns out, neither had much wealth at the time of his death, but their names will be linked forever with one of the most well-known events in American history.

A Samuel Tilden: Prohibitively Rare Portrait Flag sparked competitive bidding that drove the final price to $27,500, nearly five times its pre-auction estimate, for one of just two known examples of the historical relic. Also doubling its estimate was an Antebellum 28-Star “Texas” Flag, which brought a winning bid of $20,000, while a Roosevelt & Fairbanks: Wonderful “Roos-e-Field” Jugate, perhaps the first ever brought to auction, found a new home at $18,750, the same amount spent for a Lyndon B. Johnson Civil Rights Act Bill Signing Pen.

Historical curiosities were extremely popular among bidders, including a Franklin D. Roosevelt: Personally-Used Wheelchair From Hot Springs, Arkansas that nearly tripled its estimate when it closed at $17,500. Bonnie Parker and Clyde Barrow sometimes eluded prosecution by eating what was caught with the contents of Barrow's Personally-Owned Fishing Tackle Box, which more than tripled its estimate at $15,625, and a Western Union Thomas A. Edison Stock Ticker Tape Machine drew nearly two dozen bids before finishing at $15,000.