By Jeremy Dibbell on July 2, 2010
When I was in Charlottesville, VA in June for Rare Book School, I came across a book with a very interesting provenance during one of the bookshop jaunts (in this case, to Franklin Gilliam Rare Books on South Street). Well, the book arrived in the mail this week, so I can finally write about it in more detail.
The book itself I can't say much about yet since I've not read it, but it is I Says, Says I; a novel, by Thinks-I-To-Myself (i.e. Edward Nares). This is the first American edition, published at Boston by Bradford & Read and Philadelphia by Anthony Finley [printed at Boston by Munroe & Francis], dated 17 October 1812 (the first edition was published at London, also in 1812). A light penciled note on the title page appears to read "Trash, Trash" (which may be an indication of the quality of the text - you can judge for yourself if you wish, since Google Books has scanned this edition). 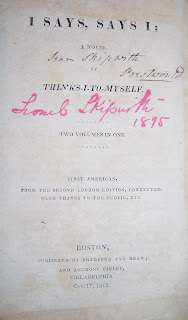 No, the interesting thing about this book is the signature(s) on the title page (pictured at left, full-size version here). The upper signature reads "Jean Skipwith / Prestwould", and the other (in red ink faded to a very bright pink) "Lionel Skipwith - 1895."
I've written about Lady Jean Skipwith (1748-1826) before (here), after I finished adding her library to LibraryThing. She was the most voracious female book collector in early America; her library included a vast number of novels and other literary writings (I suspect she had a fair majority of all English novels written by women during her lifetime; check out her author cloud). In her will she left 200 volumes each to her daughter-in-law Sarah Nivison Skipwith (wife of her son Humberston) and her two daughters Helen and Selena.
Sarah Nivison Skipwith having died before her mother-in-law, the books meant for her were apparently given to her widower, Jean's son Humberston Skipwith (1791-1862). From there this novel likely passed to Humberston's son Grey (1840-1895), and from him to his son Lionel (1882-1918); the date of Lionel's signature coincides with the year of his father's death.
So this book has quite a story (to me, an irresistible one, in fact), and that's why it's now on my shelves.