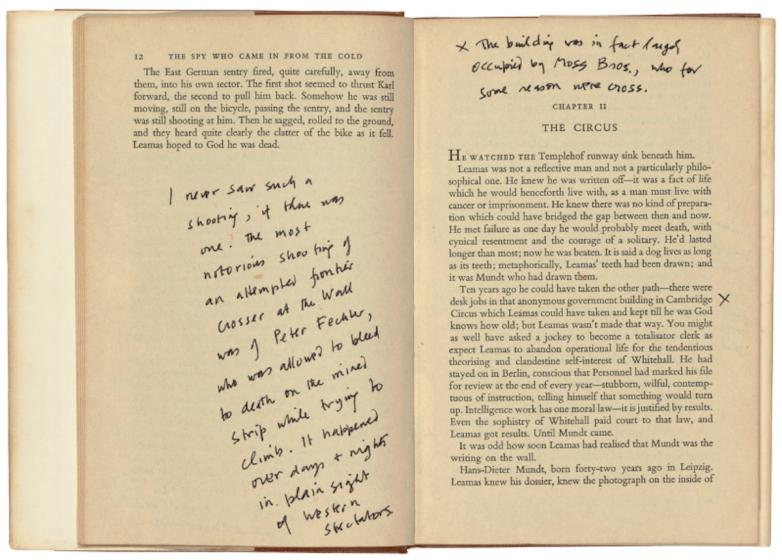 Annotations from John le Carré's The Spy Who Came in from the Cold, offered at Christie's this week in a sale to benefit the charity English PEN.

The Christie's online sale First Editions, Second Thoughts, to benefit English PEN, ends on Tuesday, July 12. This sale includes 89 lots of modern first editions, all annotated or illustrated in manuscript by their authors. Anthony Gormley's On Sculpture, with an accompanying ink drawing "Stand up for Ukraine II" is estimated at £15,000–20,000. Tracy Emin's Strangeland, annotated with a gouache drawing and inscription on the half-title, could sell for £8,000–12,000; the same range has been assigned to a copy of John le Carré's The Spy Who Came in from the Cold, which the author was annotating for the sale at the time of his death in December 2020. Roald Dahl's The BFG, extra-illustrated by Quentin Blake, could sell for £6,000–9,000. Margaret Atwood has heavily annotated a copy of the first UK edition of The Handmaid's Tale, adding more than 1,100 words of commentary (£4,000–6,000); Atwood has similarly annotated a first UK edition of The Testaments (£2,000–3,000).

At Aguttes on Tuesday, Autographes & Manuscrits, in 301 lots.

At Christie's London on Wednesday, 254 lots of Valuable Books and Manuscripts. A copy of La bible historiée, the first edition of a complete French version of the Bible (printed at Paris by Antoine Vérard between May 1498 and October 1499), is expected to sell for £600,000–900,000. This deluxe copy on vellum is one of just four known in this state, the most complete, and the only one in private hands. Sharing an estimate of £400,000–600,000 are a deluxe copy on vellum of the 1467 second edition of Thomas Aquinas' Summa, secunda secundae (the Doheny copy) and a first issue copy of Newton's Opticks (1704). This is a presentation copy from Newton to his friend Nicolas Fatio de Duiller, in fact the earliest dated presentation copy of the work. A first edition of Newton's Principia (1687) could sell for £350,000–500,000. This sale is full of similarly eye-wateringly excellent offerings, so do give the catalog a thorough browse.

At PBA Galleries on Thursday, Fine Literature with Mystery, Fantasy and Science Fiction, in 574 lots. An inscribed copy of Charles Bukowski's first book, Flower, Fist and Bestial Wail (1960) rates the top estimate at $10,000–15,000; there are several other Bukowski lots that may be of interest. A first printing copy of Rex Stout's The Rubber Band (1936) could sell for $4,000–6,000; the same estimate has been assigned to Elaine Steinbeck's copy of John Steinbeck's Sweet Thursday (1954), with a letter by Elaine Steinbeck explaining the origins of the novel.