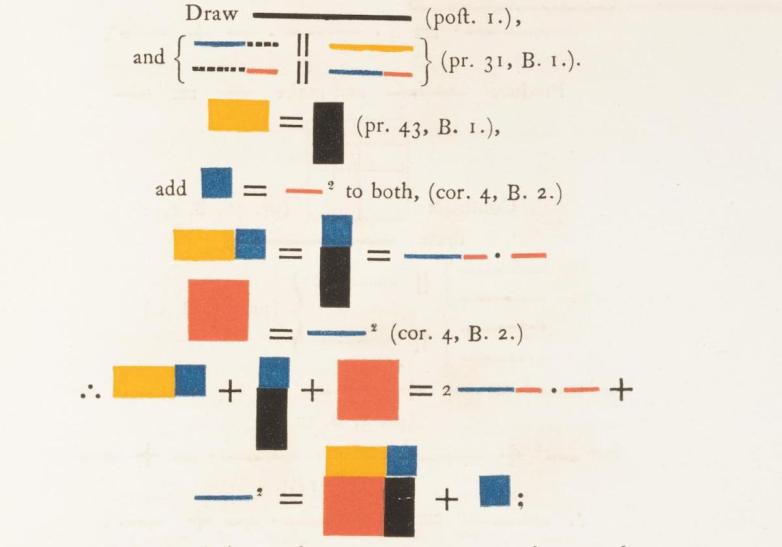 1847 four-color edition of Euclid's Elements, edited by Oliver Byrne and published by William Pickering. Offered at PBA Galleries this week.

The Sotheby's London sale of Original Film Posters ends on Tuesday, February 8. The 120 lots include the poster for the first James Bond film, Dr. No (1962), estimated at £20,000–30,000; Georgio Olivetti's posted for La Dolce Vita (1960), which could sell for £18,000–26,000; and a posted designed by Ralph McQuarrie for the British Royal Charity World Premiere of The Empire Strikes Back (1980), one of the rarest marketing pieces known for this film. It is expected to sell for £14,000–22,000. Rating the same estimate is a withdrawn draft design for the international release of The Empire Strikes Back.

Fine Photographs will be the order of the day at Swann Galleries on Thursday, in 251 lots. This sale marks the 70th anniversary of the first auction of photographs in the U.S., held at Swann in 1932. Sally Mann's 2011 ambrotype triptych of self-portraits rates the top estimate at $30,000–45,000. A silver print of Robert Frank's Los Angeles could sell for $25,000–35,000. Diane Arbus' Female impersonator with jewels is estimated at the same range, as is Helen Levitt's New York (Foreign Legion).

Rounding out the week on the west coast, PBA Platinum: Rare Books and Manuscripts at PBA Galleries on Thursday. The 113 lots include Thomas Salisbury's Mathematical Collections and Translations (1661), containing the first translation in English of Galileo's Dialogo. It could sell for $30,000–50,000. George Vancouver's Voyage of Discovery to the North Pacific Ocean (1798), with the atlas, is estimated at $20,000–30,000, and the lovely four-color William Pickering edition of The Elements of Euclid edited by Oliver Byrne (1847) rates the same estimate. This copy is in the rare original wrappers. Also estimated at $20,000–30,000 is a 1705 manuscript order by Philip V of Spain authorizing the settlement of California.