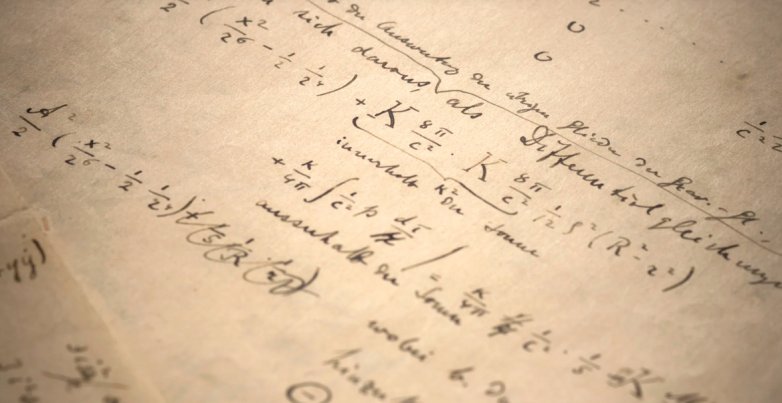 Detail from the Einstein-Besso Manuscript, to be sold at Christie's Paris this week.

After last week's record-shattering display in the auction rooms, here's what's coming up:

Livres Rares et Manuscrits at Christie's Paris on Monday, November 22, in 179 lots. Michel de Montaigne's copy of a 1538 edition of Terence's comedies, with extensive annotations by Montaigne over the course of two readings justifiably rates the top estimate of €300,000–400,000. A late fifteenth-century Latin Book of Hours on vellum with decoration in the style of Willem Vrelant could sell for €200,000–300,000.

Also at Christie's Paris, on Tuesday, November 23, The Exceptional Sale includes a lot of much interest to us: the Einstein-Besso Manuscript, written between June 1913 and early 1914 by Albert Einstein and Michele Besso is estimated at $2.4–3.5 million. This 54-page manuscript records a key moment in the creation of the theory of relativity.

Following the record-setting sale last week, another sale to benefit the Dorothy Tapper Goldman Foundation will be held at Sotheby's New York on Tuesday: Making our Nation: Constitutions and Related Documents, Part I. The 74 lots include a copy of the very rare first separate printing of the proposed amendments that would become the Bill of Rights, estimated at $700,000–1,000,000. The Proceedings and Ordinances of the May–June 1776 Virginia Convention, from the library of Virginia politician Cyrus Griffin, is estimated at $250,000–350,000, and a copy of the first book printing of the Declaration of Independence could sell for $200,000–300,000. The political junkie in me could go on with this sale all day, but we must turn to other things.

Also on Thursday, Bibliothèque Pierre Collin at Pierre Bergé & Associés. The 301 lots include a deluxe state of Charles Nodier's Histoire du roi de Bohême (1830), which shares the top estimate of 12,000–15,000 with an 1838 edition of Saint-Pierre's Paul et Virginie.