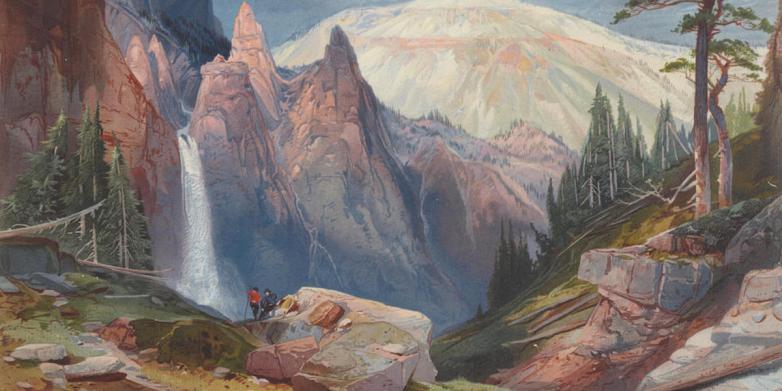 Lithographic illustration from Moran & Hayden's The Yellowstone National Park, and the Mountain Regions of Portions of Idaho, Nevada, Colorado and Utah (1876), offered at Bonhams this week.

The week kicks off with 407 lots of Livres anciens du XVe au XIXe siècle at ALDE on Tuesday, October 20. Some really nice early printing and bindings in this one. The expected leader is a copy of Dahlberg's Suecia Antiqua et Hodierna (1726), estimated at €25,000–35,000.

On Wednesday, October 21, it'll be Americana, Travel, and Natural History at Bonhams New York, in 260 lots. Moran and Hayden's The Yellowstone National Park, and the Mountain Regions of Idaho, Nevada, Colorado and Utah (1876), containing fifteen chromolithographed plates and described by Bill Reese as "the greatest American landscape book of the post-Civil War era," could sell for $150,000–200,000. A copy of Lorenzo Aldrich's Journal of the Overland Route to California! and the Gold Mines (1851) is estimated at $40,000–60,000. From the conchology collection of the late Richard I. Johnson comes Albertus Seba's Locupletissimi Rerum Naturalium Thesauri Accurata Descriptio (1734–1765), which could fetch $30,000–40,000. And a copy of the first three parts of Theodor de Bry's Great Voyages (1590–1592) is estimated at $30,000–50,000.

Forum Auctions will sell Books and Works on Paper on Thursday, October 22. The 292 lots include several Bram Stoker rarities, including a copy of his first published work, Address Delivered in the Dining Hall of Trinity College (1872), estimated at £1,500–2,000. The first abridged paperback edition of Dracula (1901) could sell for £1,200–1,800, while a copy of the first edition of Dracula in Irish (1933) is estimated at £600–800. A set of six John Buckland-Wright etchings for the 1950 Golden Cockerel Press edition of Swinburne's "Pasiphae," perhaps proof sheets, is estimated at £400–600.

Rounding out Thursday's sales is PBA Galleries' 360-lot auction of Fine Books – Fine Press – Fine Bindings. The Trianon Press edition of Blake's Illustrations to the Book of Job (1987) and the Kelmscott Press Poems of William Shakespeare (1893) are both estimated at $6,000–9,000.