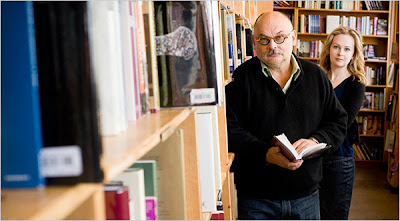 Michael Powell and his daughter Emily. Photo by Leah Nash for The New York Times

The plans for a $5 million expansion of Powell's flagship store have been put on hold.
Citing the overall current economic downturn and a 5% decline in sales the "project no longer looked prudent" according to owner Michael Powell.

How close were they to enlarging their city of books? The plans were already drawn up and the financing was secured. And when do they feel they'll be ready to move forward?

"It's going to take a period of time to recover...Whether it's 2 years or 10 years I don't know, but I don't think it's going to be quick. People are nervous." says Powell.

More at Peter S. Goodman's piece for the New York Times on the current economic climate of Portland, Ore "A Downturn Wraps a City in Hesitance"