From NY To CA, A Paper Fair and Newly Recovered Seuss Manuscript

Two stories to talk about this week, each one taking place on either end of the country. First, let's start on the East Coast, where the inaugural Art on Paper show is being held at Pier 36 in New York City. Organizing the affair is Art Market productions, a Brooklyn-based firm that produces the Miami Art Project and the Seattle Art Fair. Fifty-five galleries from around the city will feature works by artists whose primary medium, whether for sculpture, painting, drawing or photography, is paper. All proceeds from opening night benefit the Brooklyn Museum.  Highlights include hand-cut cardboard sculptures by Wayne White, Meg Hitchcock's Mundaka Upanishad, an installation showcasing letters cut from the Koran and a massive paper cloudscape by Brooklyn-based artist Mia Pearlman. Even the prolific, book-writing (A Heartbreaking Work of Staggering Genius) TED-talking David Eggers is showing fifty original animal-themed drawings, all for sale, with proceeds going towards a nonprofit that helps children pay for college.  The show runs from March 5th through the 8th, and ticket prices range from $25.00 for a one day pass, to a three day pass for $150.00, which also includes access to the VIP opening night party and lounge. 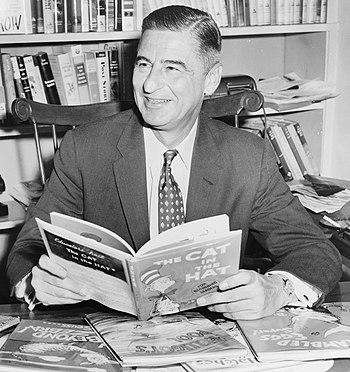 In La Jolla, California, an unpublished manuscript by Dr. Seuss (Theodor Geisel) was recently found in the author's home. According the Barbara Marcus, president and publisher of Random House Children's Books, the manuscript, entitled "What Pet Should I Get?" was originally discovered back in 1991, shortly after the author's death. The material was boxed and forgotten about until now, when Geisel's widow once again set to cleaning out the author's office space. The manuscript, accompanied by photographs and illustrations, is believed to have been written in the late 1950s, since the brother and sister in this volume also appear in One Fish Two Fish Red Fish Blue Fish, which was published in 1960. "What Pet Should I Get?" will be published by Random House in July 2015 and will join the pantheon of Seuss stories beloved by millions worldwide. (Coincidentally, Seuss would have celebrated his 111st birthday on March 2, making this announcement doubly sweet.)