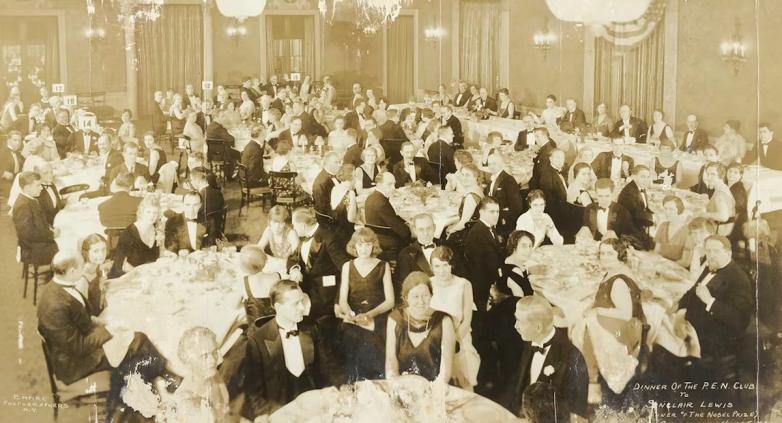 Dinner of the P.E.N. Club to Sinclair Lewis, winner of the Nobel Prize, Hotel Commodore, November 25, 1930.

Last fall, the mighty literary organization PEN, which originated in London as a dining club for writers, celebrated its 100th anniversary. In our winter 2022 issue, we chronicled PEN International’s past through the Ransom Center’s extensive archive and explored the group’s current work and future plans, as it has evolved into a human rights organization that defends and supports free expression around the globe.

Having got its start one year later, PEN America takes its turn for a centennial celebration. The New-York Historical Society just opened PEN America at 100: A Century of Defending the Written Word, an exhibition featuring artifacts, letters, posters, photographs, and ephemera that illustrate PEN’s “enduring mission to promote a diverse literary culture, campaign against censorship and book banning, and champion discourse across borders and languages.”

Highlights include a letter from poet T.S. Eliot, expressing his “distress and terror” over a dinner being organized in his honor; a note from author Jack Kerouac in 1957—the year On the Road was published—in which he wrote that he was “still living on a ‘beat’ basis” and deferred payment of his membership dues until his royalties arrived; a copy of 2009’s Burn This Book: PEN Writers Speak Out on the Power of the Word, edited by Toni Morrison; and photographs of authors including Eleanor Roosevelt, Arthur Miller, Pablo Neruda, Susan Sontag, and Margaret Atwood.

PEN America at 100 will remain on view through October 9.