Books &c. at Auction This Week 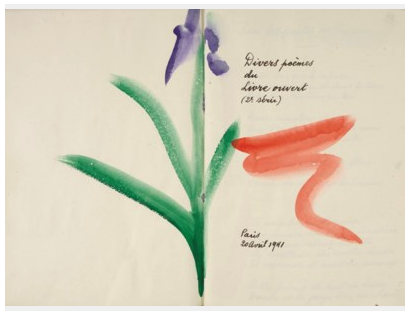 A much quieter auction week coming up:

Christie's Paris will sell the first part of the Bibliothèque Paul Destribats in a three-day, 607-lot sale from Wednesday through Friday, July 3–5. Cendrars and Delaunay's La Prose du Transsibérien et de la petite Jehanne de France (1913), one of 28 copies on Japan paper, signed and initialed by Cendrars, is estimated at €200,000–300,000. At the same estimate are Man Ray's Champs délicieux (1922), one of just two examples known, and the corrected proofs of André Breton's Manifeste du surréalisme and Poisson soluble (1924).

Also on Wednesday, Forum Auctions holds an online sale of Books and Works on Paper, in 257 lots. Lots 1–121 comprise "The English as Collectors," a documentary library collected by Frank Herrmann (1927–2017), the founder of Bloomsbury Book Auctions and the author of several books about collecting and the auction trade. There will be much of interest here to anyone whose interests run in such directions. Highlights from this sale are expected to include a collection of signatures from members of the 1953 British Mount Everest Expedition and a large-paper copy of Thomas Frognall Dibdin's Bibliographical Antiquarian and Picturesque Tour in France and Germany (1821), each estimated at £1,000–1,500.

A couple notes on last week's sales: as I was writing the blog post I thought that many of the estimates for the June 26 sale of The Library & Picture Collection of the late Martin Woolf Orskey at Dominic Winter seemed fairly low, and that was borne out by the results: the £780,360 total realized was more than twice the expected high estimates. The top lot proved to be a set of five colored English woodcut broadsides from around 1670, which fetched £30,000 (ten times their presale estimate). A copy of the earliest known depiction of a book auction, estimated at just £600–800, sold for £18,500!