With the unofficial start of summer behind us, plans for vacations spent on hammocks and beach towels take shape. When and where, and what will you be reading? I thought I'd share a roundup of four recently published or soon-to-be-published fiction with antiquarian or auction-related themes, i.e., perfect summer getaway reading for bibliophiles and collectors. First up, The Quick by Lauren Owen (Random House, $27, on-sale June 17). Judging by its cover alone, it's a book I would pick up. Set in late Victorian London, the neo-gothic novel's main character is a poetic young man named James Norbury. James is new to London, and soon enough, things go very badly for him. His disappearance prompts his sister to come to the city, where her search leads to the mysterious Aegolius Club, whose members are ageless men with strange appetites. At more than 500 pages, this debut novel is bulky enough to satisfy.

Auction-watchers will enjoy A Paris Apartment by Michelle Gable (Thomas Dunne/St. Martin's Press, $25.99), a debut novel inspired by the real discovery of an early twentieth-century French socialite's apartment in Paris full of fabulous art and antiques. Shuttered since World War II, the apartment was finally opened and its contents auctioned in 2010. In this fictional version, thirty-something American April Vogt, a furniture expert for Sotheby's, spends a few weeks in Paris combing through the apartment and becoming obsessed by the salty journals of Madame de Florian. Love, art, history, Paris -- what more can you ask for? If a haunting tale set in a South American city is more your speed, try this slim but dense read: The Antiquarian by Gustavo Faveron Patriau (Black Cat/Grove Atlantic, $16). The murderous main character is an antiquarian book collector in a world where rare book dealers double as organ traffickers. Translated from Spanish, the language is lush, dark, and erudite, with shades of Calvino and Borges.

Lastly, a recent "HybridBook" reprint of Christopher Morley's The Haunted Bookshop (Melville House, $16) is new to me -- and such a sweet little mystery, first published in 1919. If you love books, and you haven't read it, this new edition is the perfect excuse. What happens inside Brooklyn's haunted bookshop, Parnassus at Home? Well, a certain book keeps disappearing from the shelf, and one lovesick young man is determined to get to the bottom of it. One of my favorite lines in the book (there are many): "Against the background of dusky bindings her head shone with a soft haze of gold." The "HybridBook" label means that, if you're so inclined, you can follow a link to see illustrations from the original publication and read more by and about the author.

END_OF_DOCUMENT_TOKEN_TO_BE_REPLACED 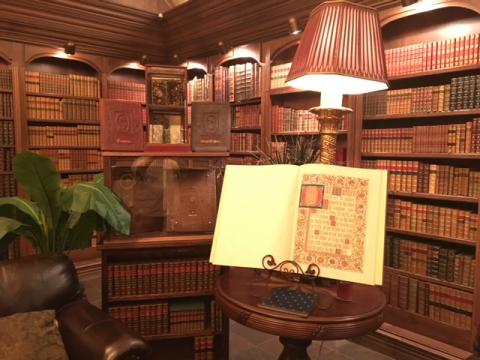